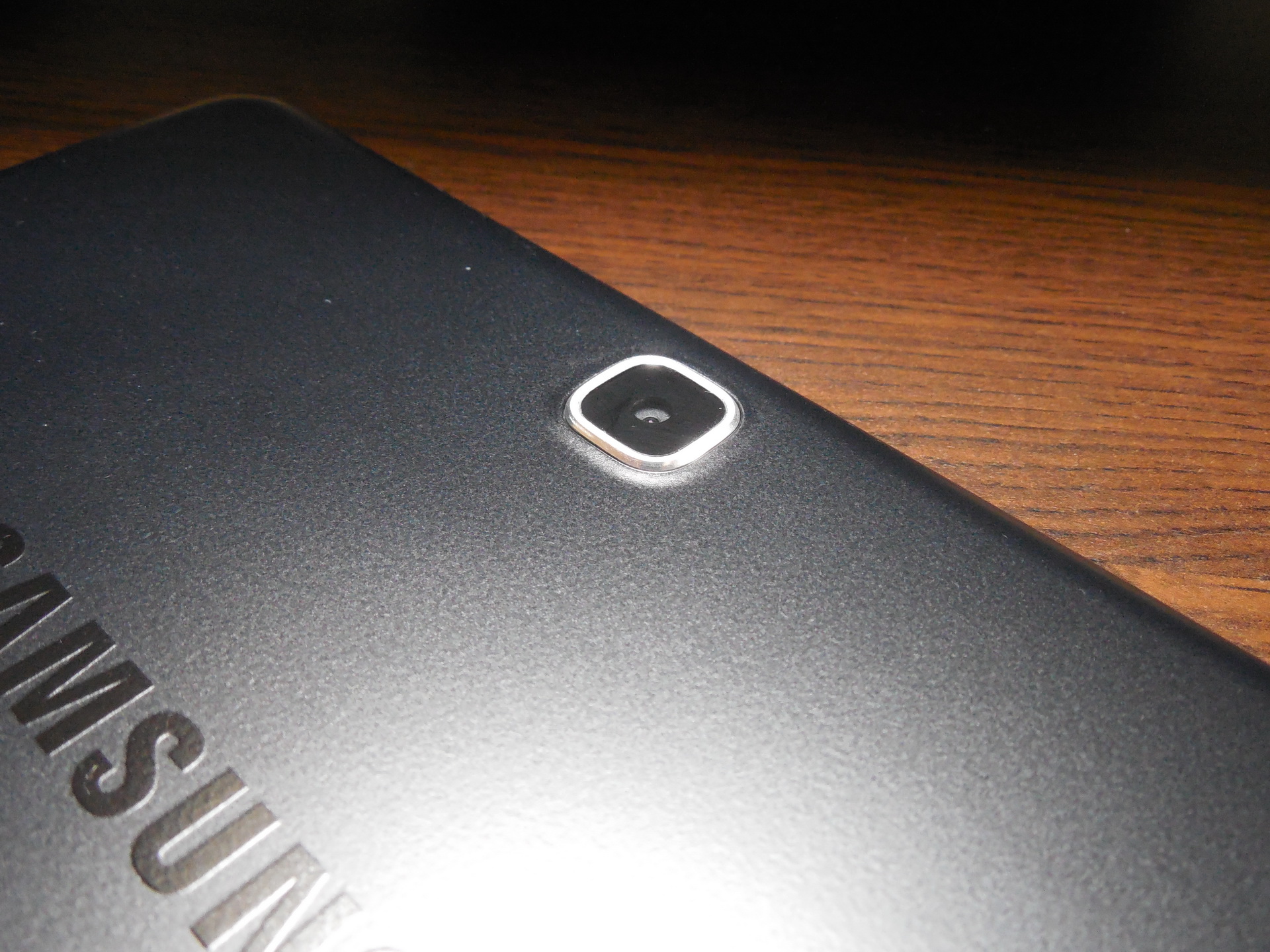 Samsung Galaxy Tab A 9.7 is the latest tablet we’ve finished testing, a 9.7 inch LTE slate, that was announced in March. This is the SM-T555 version of the product, the very first Samsung tablet with a 4:3 screen. It’s priced at $381 in the LTE version or $300 for the WiFi only unit. 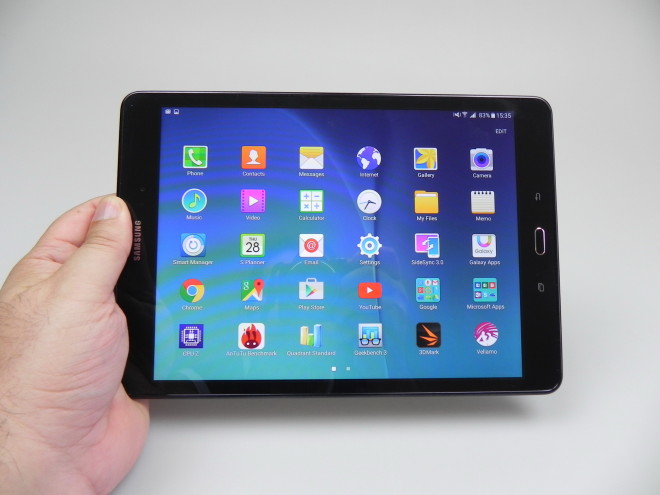 This midranger measures 7.5 mm in thickness, weighs 456 grams and has the same thickness as the iPad Air 1, plus it’s 22 grams lighter. It comes with big bezels, but it’s comfy to use and has good grip. The format offered here is good for games and movies and the top and bottom bigger sections are good in order to properly hold the tablet with your fingers on the edges (in landscape).

The facade is rather glossy and a bit of a fingerprint magnet. Galaxy Tab A relies on a plastic case, with a nice feel, but this is not a soft touch material. It feels a bit like a midrange laptop plastic, to be honest. Samsung’s product has rounded edges, comes in black or white and at the front we find the front camera, sensors, physical Home button and capacitive Recents and Back buttons. 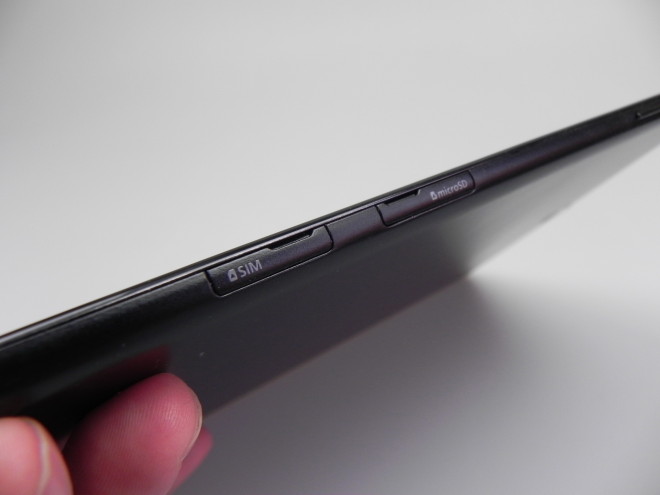 There’s nothing at the top, while at the bottom we find dual speakers, a microUSB port and audio jack. On the left side there’s once again nothing, while on the right we’ve got the microphone, On/Off button, volume buttons, all of them comfy. Also on this side there’s the microSD card slot and microSIM card slot as well. Overall, this design is pretty much OK and quite comfy, plus it doesn’t feel heavy during long gameplay, which is always a good thing. 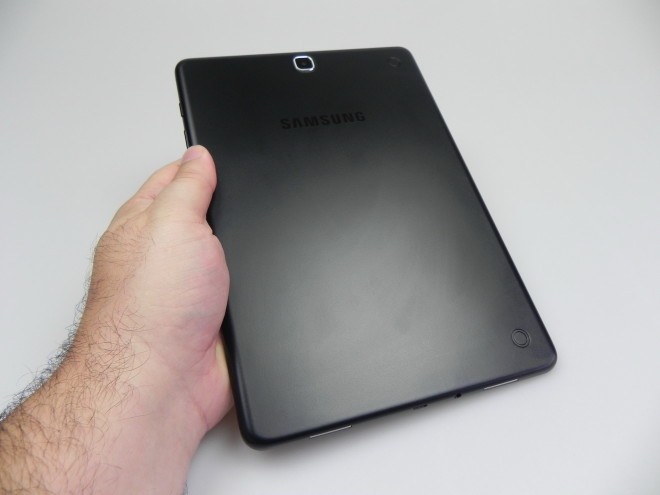 In our test, that involves HD video playback in a loop, with WiFi on and brightness at 200 LUX, we achieved a very impressive 13 hours and 9 minutes, which is just a hair below the Galaxy Tab S8.4, that scored 13 hours and 32 minutes. Also, we beat the iPad Air, that scored 11 hours and 13 minutes. I’d say that watching 6.5 hours of movies is great on such a device. 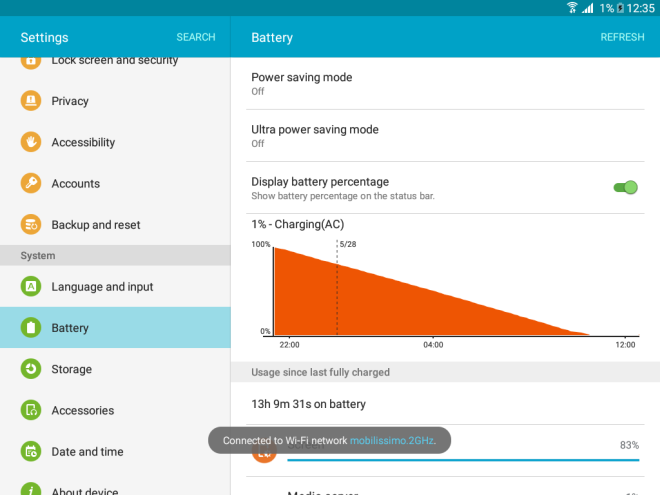 The PCMark battery test, that simulates continuous usage, also at 200 LUX brightness gave us a result of 10 hours and 13 minutes of functioning time, basically doubling the performance of the Galaxy Tab S 10.5, that scores around 5 hours and 21 minutes. Overall, this is a great battery, that does require a long time of charging: 4 hours. However, it’s well worth it and a similar time frame, between 3 and 4 hours is required by the iPad Air models too.

The acoustics of this model involve dual speakers, on the side (in landscape) or at the bottom (in portrait mode). The player included here is a standard Samsung affair, with a minimalistic UI, great music organization and the usual options that involve the SoundAlive equalizer and such. It offers genre settings, 7 sliders for customization, options for 3D, Bass and Clarity, as well as round buttons that when spun around, tweak the bass/treble focus or the instrument/vocal focus.

Then there’s Adapt Sound, Sound Alive+ for rich surround, Tube Amp, Play Speed and Smart Volume, the latter equalizing all tracks to a similar volume. The actual listening experience is crisp, clear, loud, offers good bass, but it lacks the amplitude and “crystal sound” of a really high end device. Tweaking some of the options you may reach that desired threshold. 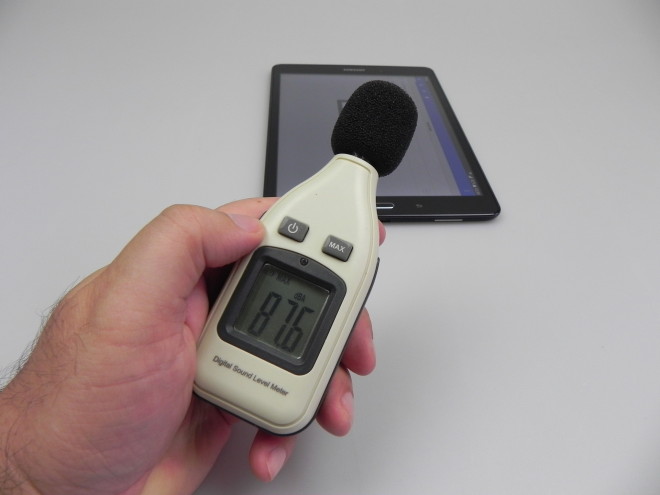 The decibelmeter test revealed a value of 87.6 dBA, that’s pretty impressive, especially since we beat the Galaxy Tab S 8.4, that scores 84.5 dBA and the iPad Air 2, that scores 86.3 dBA. This model is loud, but the acoustics could be crisper. The screen we’re dealing with here is a 9.7 incher with a 1024 x 768 pixel resolution, a PLS TFT/LCD with 16 million colors and 4:3 aspect.

It’s glossy, but it handles light in a pretty OK way. The video app is the standard Samsung player, with crop, pop up play options, pinch to zoom and the experience when viewing clips is clear, crisp, bright, but the colors are a bit too vivid for my taste. They’re also unrealistic. View angles are wide and the pixels are of the RGB Stripe kind here. Somehow the tablet feels like it has a higher resolution than it actually does, thanks to its pretty high brightness. 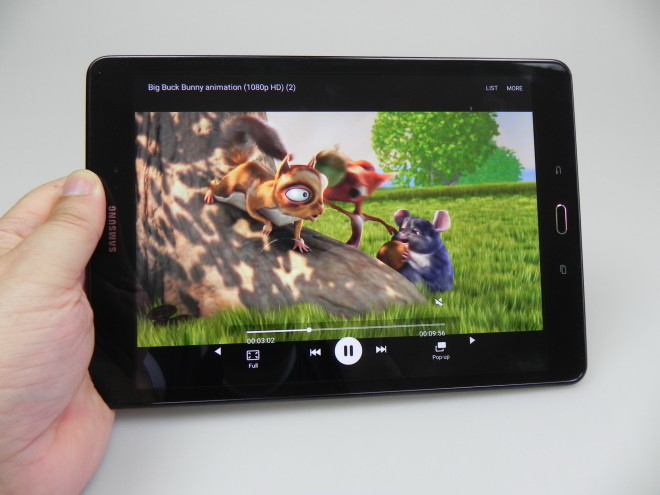 We tested that and with a luxmeter we achieved 402 LUX units, which is very close to the high performing Galaxy Tab S 8.4 and its 432 LUX. We beat the iPad Air 2 and its 354 LUX, as well as the Xiaomi Mi Pad and its 310 LUX. Brightness is good here and the Settings area includes font settings (style and size), timeout, Smart Stay (keeps screen on when you look at it), Screen Mode (Adaptive Display or Reading Mode, that makes the image a bit more yellow and the bright white less aggressive on the eyes).

Overall, this is a good screen, especially for a midranger. The camera that this slate offers is a 5 megapixel unit, with 4X digital zoom and 720p video capture. It has geotagging and autofocus, plus effects and a timer, as well as a minimal UI. There’s a Panorama option offered here, Continuous Shot too, Beauty Face, Sound + Shot and Sports. 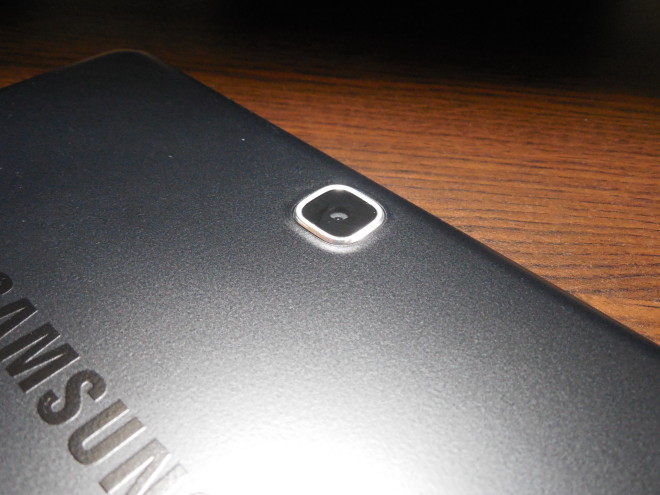 Focus is pretty slow and so is picture capture, but if you have steady hands, you will get some OK shots. Most of the pictures we took were pretty blurry, but the colors were good and overall for a midrange tablet this is just fine. Still, it’s below what you can get on a lower end phone with a 5 MP camera and a third of the price.

The editing is done with the usual rotate, crop, collage options, with the inclusion of the Photo Editor and Effects and Draw functionality. Now let’s talk performance, with the gaming being first. We reached a temperature of 37.1 degrees Celsius on this model, after playing 15 minutes of the game Riptide GP2, so it doesn’t overheat. 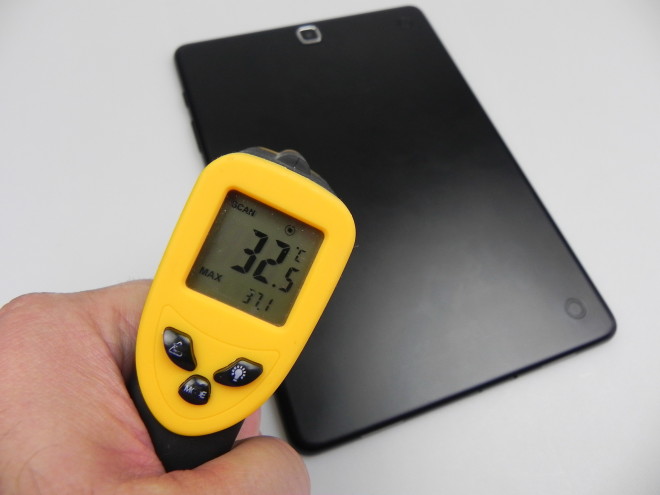 The web browser included here is fast and the virtual keyboard is comfy, plus it includes a numeric row, that is always welcome. We’ve also got handwriting support and voice input support. The phone section offers speed dial, video calls and provides an OK quality during calls. Obviously you are going to use a headset. Now let’s see the benchmarks. I have decided to compare this model to the LG G Pad 8.3 and the ASUS MeMo Pad FHD 10, just to see how it faces a Snapdragon 600 device with 2 GB of RAM and a powerful tablet from 2013 with an Intel Atom dual core Z2560 CPU with 2 GB of RAM included.

These are the results: 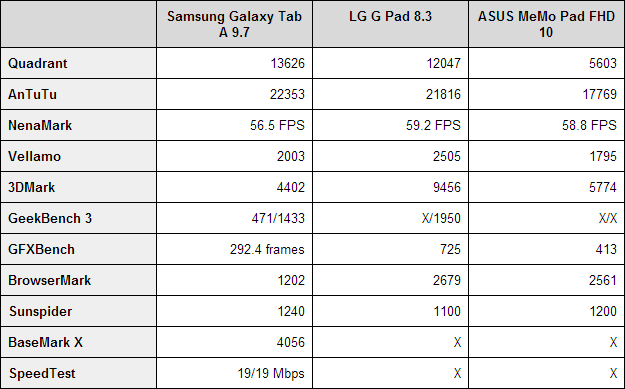 The benchmark results are not very impressive here and even a 2013 model is able to beat us. However, in spite of that the Samsung Galaxy Tab A 9.7 has no lag and runs Riptide GP2 without a problem. The OS and UI here are Android 5.0.2 with TouchWiz on top, the modern version from the latest Galaxy S models. We get material design elements, a carousel multitasking, unique widgets and flat icons. 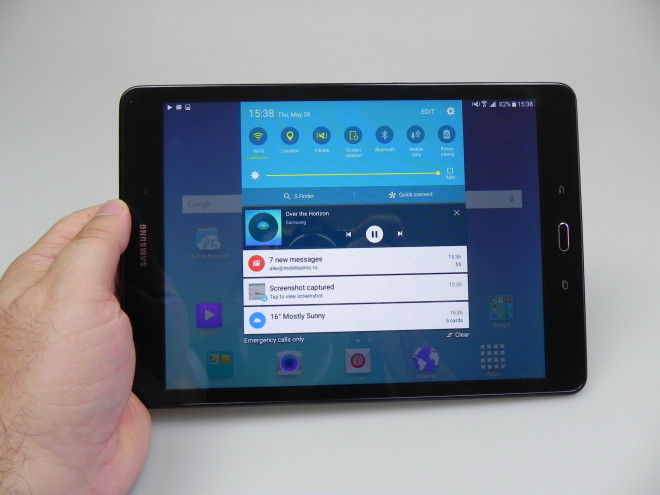 The Quick Settings and Notifications are unified and the Settings area is split into 2 panes. The dropdown part also includes the S Finger, Quick Connect and brightness slider. If you keep the Recents capacitive button pressed, you will trigger the multi window mode, that allows you to use two apps at the same time, splitting the screen in two portions. You can also copy content (text or image) from one part of the screen to the other.

The UI is fluid and getting to the Settings area, you can place your palm on the screen to mute the experience and do a palm swipe capture. There’s also a Private mode, accessory options and Power Saving, that limits the CPU usage and some connectivity options. Then there’s the Ultra Power Saving mode, that uses a black and white UI and cuts many apps from the regular usage experience. 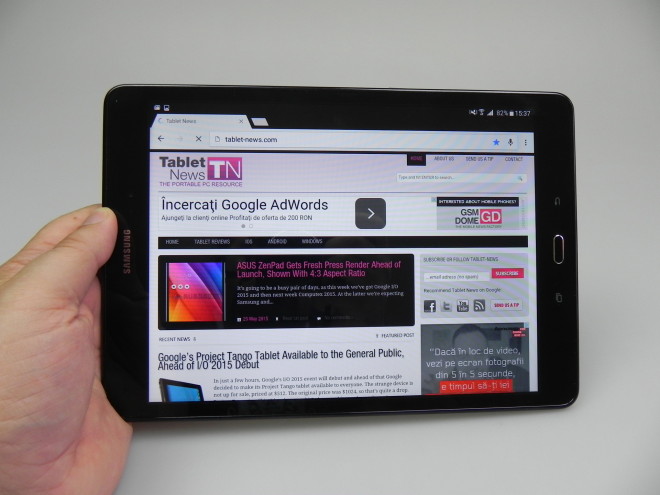 It limits connectivity, vibrations and only lets basic apps work. With Ultra Power Saving you can reach 2.4 days of functioning with 50% battery. The preinstalled apps list includes My Files, Memo, Smart Manager (Clear RAM, Storage, battery and it has a nice widget), S Planner, Side Sync 3.0 (mirror your device on another), Galaxy Apps (the app store), Chrome, Google Maps, YouTube, the Google suite and finally Microsoft apps.

We’ve got Word, Excel, Powerpoint, OneNote, Skype and OneDrive here, all of them with an intuitive interface. You’ll see a more ample demo of their productivity features in the video review. There’s not much bloatware here, luckily. Finally you get the usual Flipboard homescreen, that you may get rid of if you want to. And now let’s see the verdict.

The Samsung Galaxy Tab A has the following Pros:

This model gets an 8.3 out of 10 for design from us, a 9 for hardware and a 9.8 out of 10 for OS and UI. The final grade is 9.03, which means we’re getting a solid midrange tablet with LTE, calls, Office and mirroring of the experience on other devices. It’s also good for games, at least for another year. 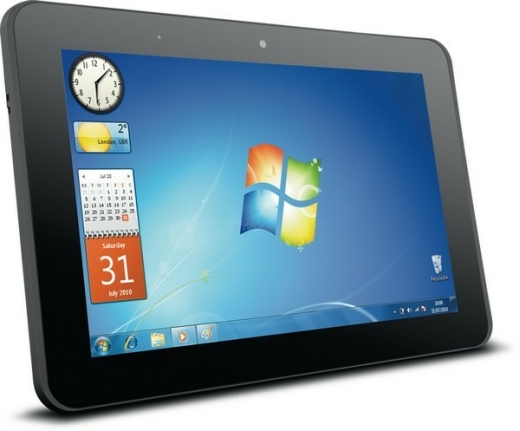