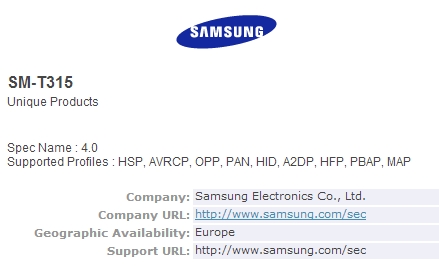 After the Galaxy Tab 3 7.0 was announced we’ve seen a ton of leaks related to the other members of the Tab 3 family, like the Tab 3 8.0 model. That one has also leaked this week, together with a bunch of phones, as they were approved by the Bluetooth SIG authority.

Only weeks ago we saw the WiFi only Galaxy Tab 3 8.0, model number SM-T311 popping up at the SIG and now the SM-T315 is here, the LTE version of the device. In the same area of the leaks, the Galaxy S4 Active and Galaxy Ace 3 were spotted listed on the same documents. While the handsets may debut as soon as this month, the possibility of a tablet unveiling is a bit more remote.

Rumors talk about either a Computex unveiling next month, or an IFA one at the end of the summer. The Tab 3 8.0 is expected to share features with the Galaxy Note 8.0, including the white case, Android Jelly Bean OS, resolution of 1280 x 800 pixels and quad core CPU. The product will be very thin, at 6.95 mm, according to speculations. The Galaxy 3 Plus is the most interesting device, because of the 2560 x 1600 res, but we’re not sure when that’s coming.

ASUS FonePad Up for Preorder in Taiwan, 7 Inch Tablet With...