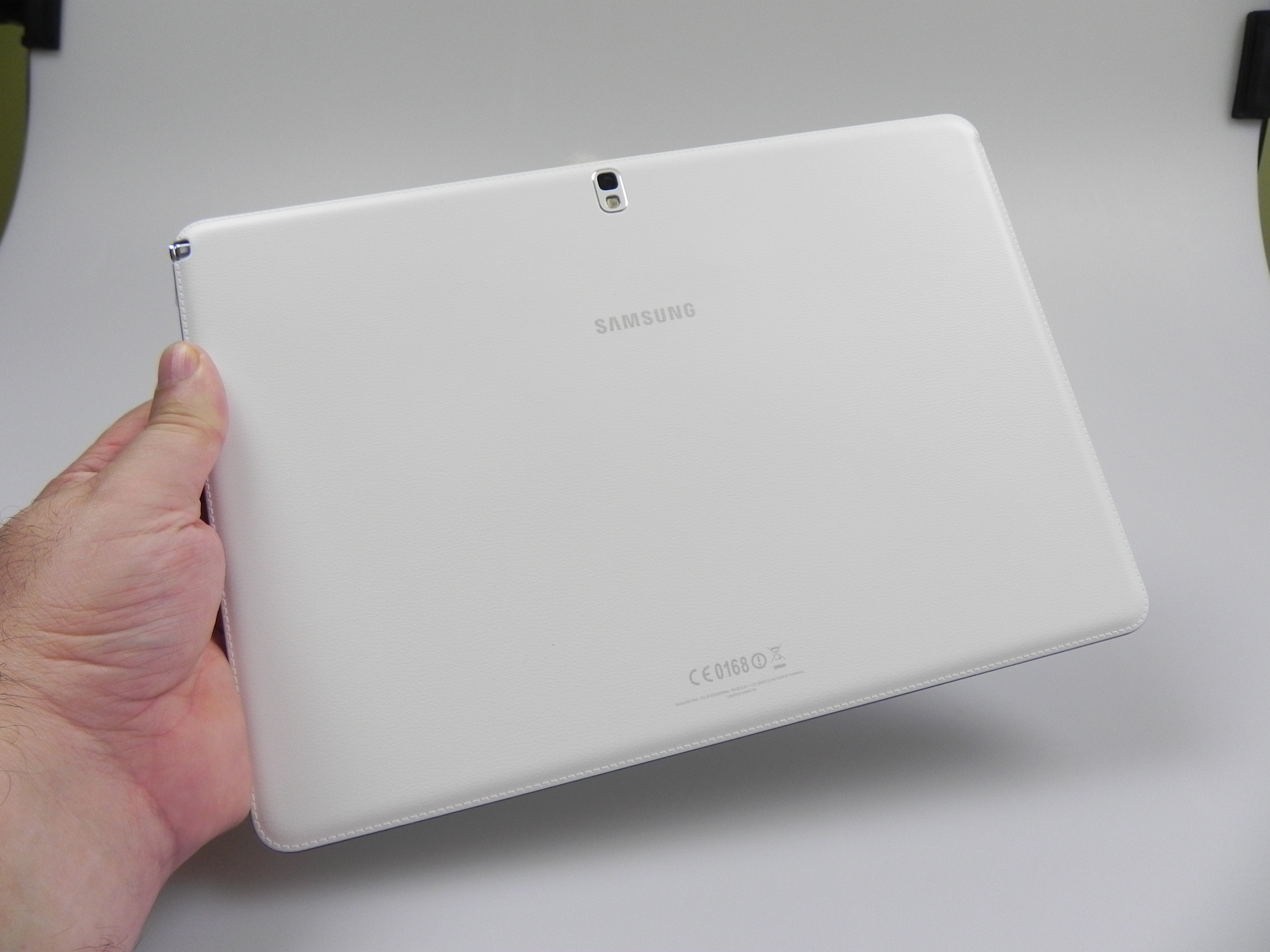 Samsung Galaxy Note Pro 12.2 is the biggest tablet I’ve ever tested, with a 12.2 inch display and Android on board. This model was announced back in January, released this spring and it comes with a stylus on board. The product is priced at $649 on Amazon and in the following lines you’ll find out if it’s worth buying or not. 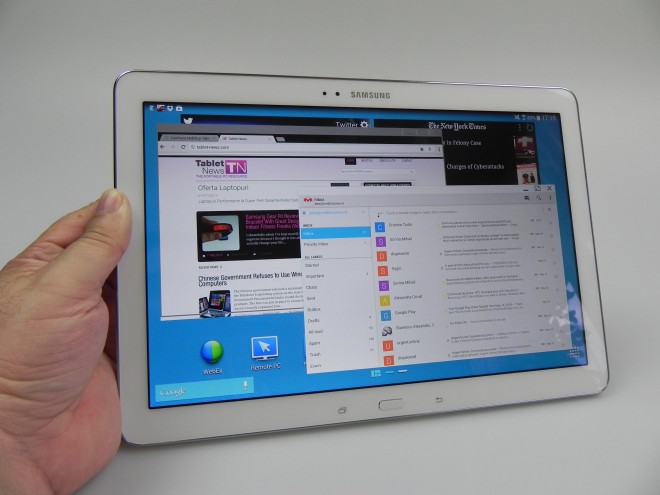 Well, the slate measures 8 mm in thickness, comes in white or black and weighs 750 grams. It packs a huge 12.2 inch display and still it’s not much harder to grasp than the Galaxy Note 10.1 first generation tablet. The device comes with a plastic back that has a leather imitation texture and it even imitates stitches at the edges, like the Galaxy Note 3 and Note 10.1 2014 Edition. The overall design of the tablet is very much like the one of the Note 10.1 2014.

We’ve got a good grip, a metallic strip edge that’s probably also plastic and big bezels, so you can firmly hold the tablet. Your hands will get tired of holding the Note Pro 12.2 after about 10 or 15 minutes and you’ll need a break usually. At the front there’s the front camera and sensors, plus the physical Home button and the capacitive Multitask and Back buttons. On the left side there’s the audio jack and speaker, while on the right we find the other stylus slot, the other speaker, a microUSB 3.0 port and a microSD card slot. 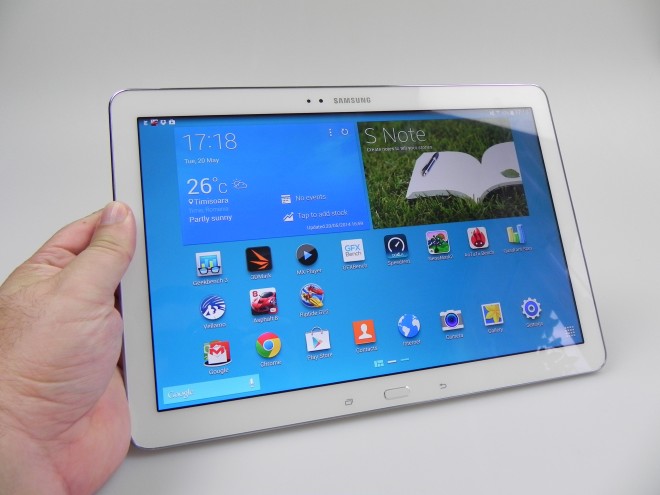 At the top there’s an On/Off button, volume buttons, infrared and microphone. Finally, at the back of the tablet there’s the main camera and flash. Overall, this is the typical Samsung design and this feels like a gadget for professionals. On the hardware side we’ve got a 12.2 inch TFT LCD display with a 2560 x 1600 pixel resolution and inside the tablet there’s an Exynos 5 Octa 8 core processor, with a quad core Cortex A15 part at 1.9 GHz and a quad core Cortex A7 1.3 GHz part.

There’s a Mali T628 MP6 GPU inside, 32 or 64 GB of storage, 3 GB of RAM, a microSD card slot with support for up to 64 GB and an 8 megapixel camera with LED flash at the back. Specs include a 2 MP front cam and the LTE version of the tablet replaces the Exynos CPU with a Snapdragon 800. Connectivity-wise, the tablet supports WiFi dual band, WiFi Direct, Bluetooth 4.0, infrared, microUSB 3.0 with MHL and GPS. Finally, the specs include an accelerometer, gyroscope, compass, an S Pen stylus and a 9500 mAh battery. 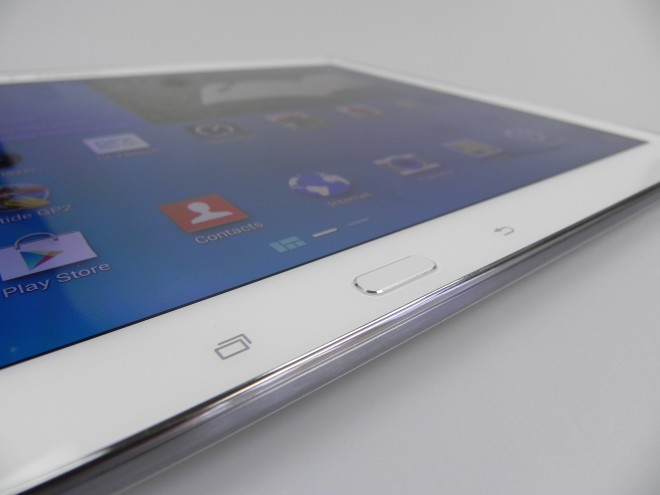 On paper the battery offers 131 hours of music playback and in our test of HD video playback with WiFi on and brightness at 50%, we achieved 7 hours and 35 minutes of playback. The same battery provides about 5 or 6 hours of gameplay and the charge time is simply huge: 5 hours and 10 minutes. The battery is not very impressive, considering the iPad Air reaches 11 hours of playback, but the Xperia Z2 Tablet is around the same usage time: 7/8 hours.

There’s also a Power Saving option, that limits the CPU usage, the screen usage and turns off haptic feedback. This tablet includes dual stereo speakers and the typical Samsung player, with the music square organizing tunes by mood and options like SoundAlive as the equalizer with a ton of options (organize by genre, tube amp effect, 7.1 virtual surround, studio reverb and more). There’s also an advanced equalizer, that allows you to custom the audio experience with sliders. The conclusion is that the speakers offer a loud and clear experience, good bass and crystal clear sound. 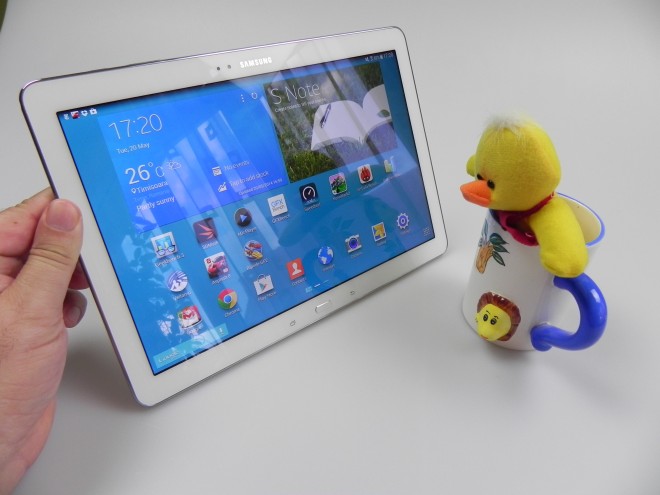 The speakers reach a level of 84.9 decibels, which is very good. By the way, the tablet outputs surround sound via HDMI. Overall the speakers are very good and let’s move on to the screen. Galaxy Note Pro 12.2 integrates a TFT LCD 12.2 inch display with a 2560 x 1600 pixel resolution and its video player does pop up play obviously. You can zoom in and use options like brightness, play speed and Sound Alive. This display offers wide view angles, vivid colors, OK brightness and good contrast. This is a RGBW screen, with two subpixels per pixel and white pixels included.

The panel is legible in sunlight the brightness reaches 370 lux units. The black levels are below the performance of a Super AMOLED, but they’ll have to do. Overall this is a good display and you can tweak the experience more using the Screen Mode settings, with options like Adapt Display, for auto adjusting it to the apps on the screen, Movie, for warmer colors and better contrast, Dynamic for more saturation and Standard for more accurate images. 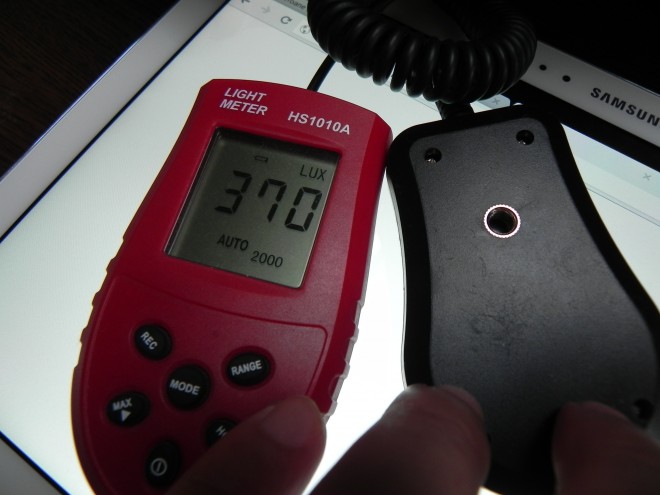 There’s also a Reading Mode, optimized for certain apps like Amazon Kindle or other e reading software. Moving further to the camera, I’ll tell you from the start that I didn’t test the camera, because nobody takes pictures with a 12.2 inch behemoth. We’ve got an 8 megapixel shooter here, with a max picture resolution of 3264 x 2448 pixels in 4:3 or 3264 x 1836 in 16:9. Options include burst, face detection, ISO, smart stabilization and the camera does Full HD video.

Video stabilization is also here, as well as functions like white balance, exposure and the usual Samsung modes. Those include Auto, Beauty Face, Best Photo, Best Face, Sound and Shot, Drama, HDR , Eraser, Panorama and Sports. You can do 4X zoom and the arrow at the bottom of the screen links you up with a bunch of effects/filters. Those include sepia, tint, fisheye and vintage. The pictures taken with this camera offer realistic colors and good quality, so overall the cam is above average for a tablet. 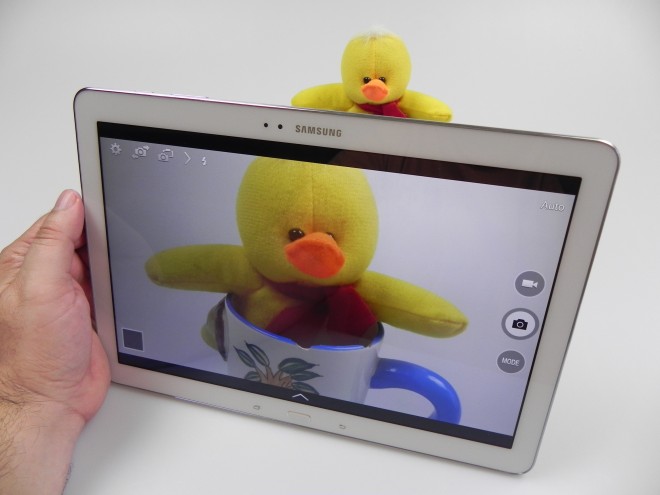 Moving on to the performance, the device’s temperature reaches 42.1 degrees Celsius, so it doesn’t quite overheat. It was very hard to find devices hardcore enough to compare with this tablet, but I chose the iPad Air and the Xperia Z2 Tablet to compare the benchmarks of the slate. In Quadrant we scored 15k points with the Note Pro 12.2, below the 17k of the Xperia Z2 Tablet. In AnTuTu we got 34k points, beating the Xperia slate by about 1000 points. 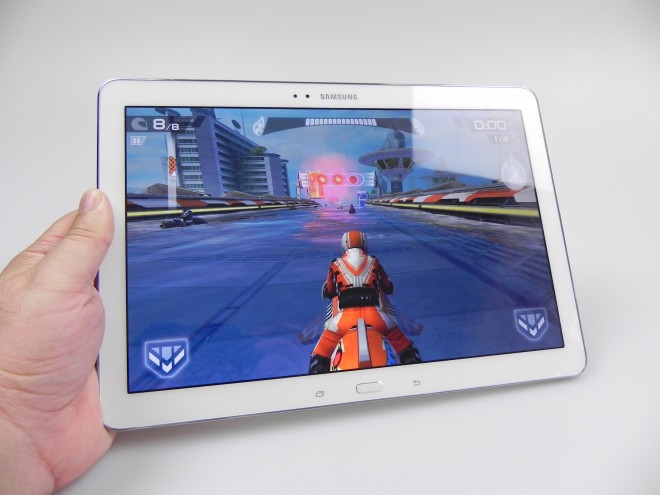 Finally this slate got 24 Mbps in download and 25 in upload, both very good results and BrowserMark brought us 786 points, which was not very good, while Sunspider registered a score of 531, that was pretty OK. This model doesn’t quite beat the rivals in the benchmarks, but it performs admirably. As far as the OS is concerned, we’ve got Android 4.4.2 in an unusual version called Magazine UX. By the way Samsung brought new fonts, new icons and a flatter UI to this device, as well as new colors.

The Magazine UX looks like a printed publication and I have to admit I actually like it. It’s triggered by swiping left or right from the homescreens and accessing a tile-based area, where you can customize “widget” thingies with features like social networking, calendar, business, email, office and much more. Everything can be a tile in the Magazine UX, even the music player. You can also resize tiles and change the general layout of the “magazine”. By the way you can add more Magazine homescreens if you want and the unusual part of the experience is also the fact that the Google search bar is at the bottom left corner of the screen, while the app shortcut is at the bottom right. 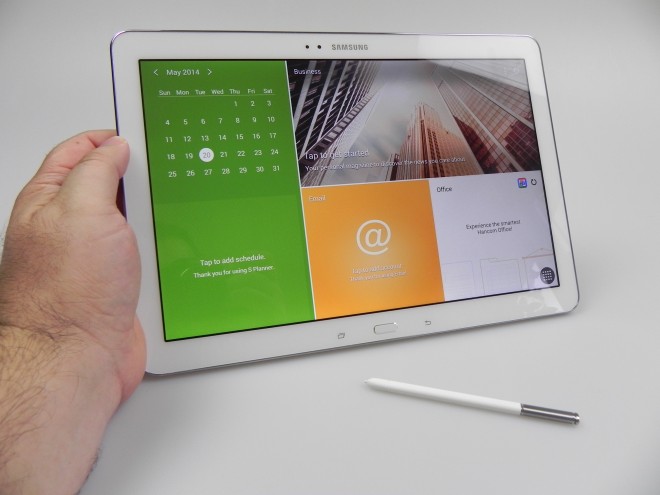 One of the selling points promoted by Samsung for this device was the Multi Window mode for multitasking. You just press the Back button and hold it or gently swipe from the side and you’ll see a rectangular vertical window popping up on the right side of the screen. From here you pick an app, open it, pick another one and split the screen in two, then three and then four. You can use a 3D view of windows, exchange copy/pasted content between windows or switch them. It’s all very efficient and everything works just fine, with a tiny hint of lag though…

The standard web browser on the tablet is pretty fast and the crisp screen also helps with reading the content without zooming in. The keyboard is comfy and also supports handwriting and voice input. Spacing is very good in the regular keyboard and the presence of the arrow keys is nifty and original. The stylus is pretty much everything we know from the Galaxy Note 3. It triggers the Air Command when pulled out, a palette of 5 options. 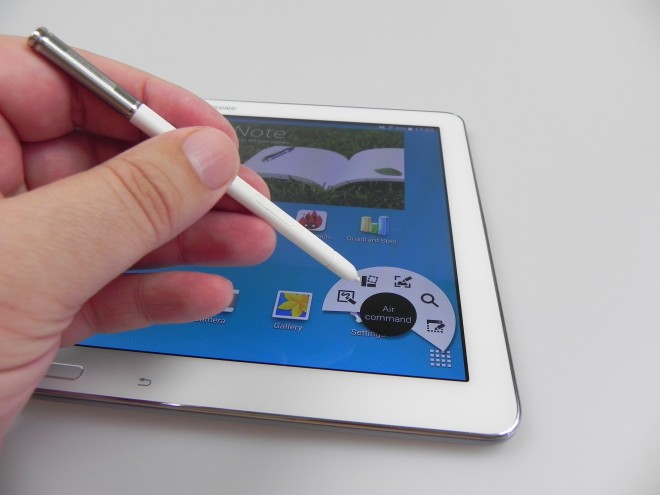 The first one is Action Memo, a small colored pad where you write stuff by hand and turn it into interactable content, like a map location, email address or phone number. Then there’s Scrap Booker, that allows you to cut stuff up from the screen and Screen Write, that takes a screenshot allows you to edit it on the go. Finally, there’s S Finder, your universal search on the Galaxy Note Pro 12.2, including tags, web content, notes and text and the last Air Command option is Pen Window.

This one involves drawing a small square on the screen, where a floating window will be fitted with one of your regular apps. If you keep the pen button pressed and circle stuff on the screen, you can cut it and paste it to your scrapbook for safe keeping. The screen supports palm rejection and this S Pen also does Air View as you hover over content. The notification area shortcuts are pretty much unchanged from other Samsung devices and this area and the settings are the places where the totally new icons and fonts come to life. 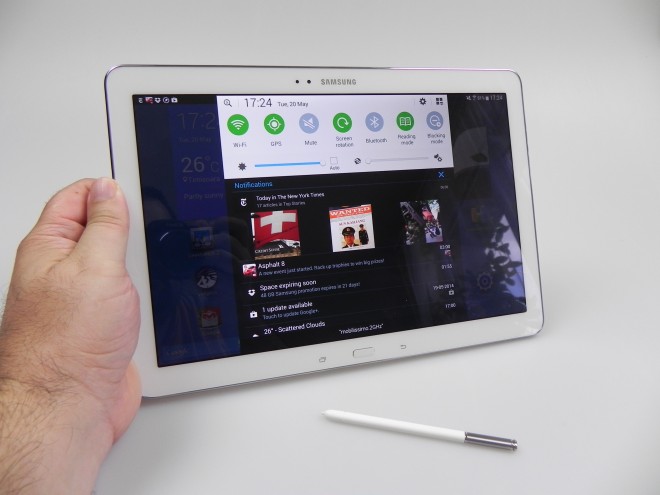 In the settings area we find Motion control features, like tilt to zoom in or out in galleries, palm motions to capture the screen or turn of media content, smart screen (Smart Stay, Smart Rotation and Smart Pause), all of them features known for about a year now from the Galaxy S4. And now let’s see the huge preinstalled app list. It includes My Files, a file manager, the S Planner calendar on steroids, S Note, with a ton of new cliparts and options, E Meeting, Remote PC and Webex. These three are productivity features, with Remote PC allowing you to control a PC from the distance, even using a mouse and keyboard if you want.

All you have to do is install a special client on your PC and you’re set. Webex comes from Cisco and it’s a business app and the list also includes New York Times and Business Week+, both with paid for subscriptions included and then comes Hancom with an Office solution that opens up Docs, Xls and PPT files. Evernote, Sketchbook, Scrapbook, Knox and Smart Remote round up the app list, with the latter allowing you to control a TV set or set top box, plus it includes a TV guide. 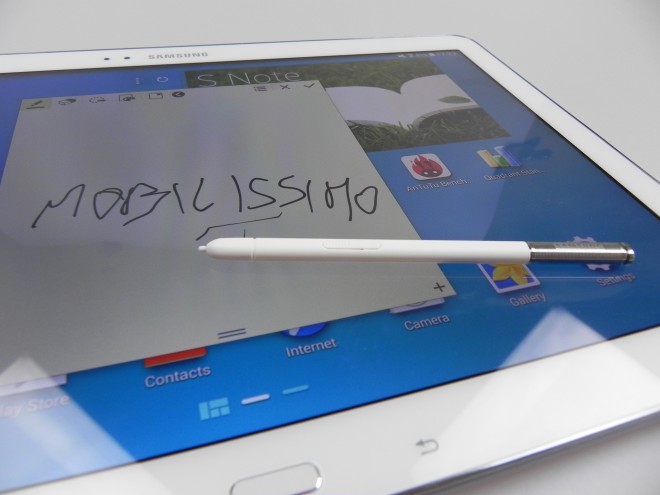 I ended the review showing you that Asphalt 8 has a weird lag on this slate, although in theory it should run just fine. Samsung bundles a premium app package worth $700 with this device, just so you know. That includes premium apps, subscriptions to magazine and services like Evernote, Linkedin and more. And now it’s time for the verdict, with the Pros and Cons!

Overall, we give this model a 9 out of 10 for design, a 9 for hardware and a 9 for OS and UI. The final grade is 9 out of 10 and this device is not for you, the average user, but rather for medical professionals, business users, schools and people who want a Surface Tablet, but they also need Android.