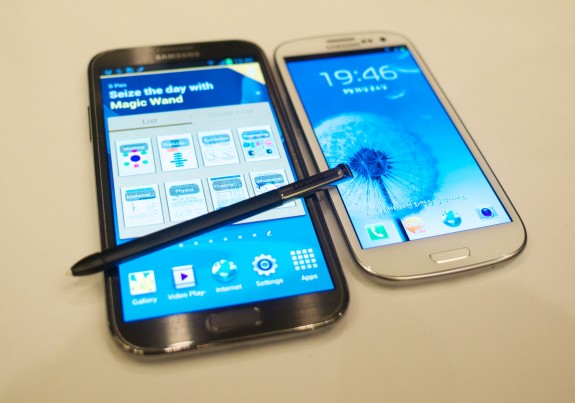 Samsung Galaxy Note II was announced this week at IFA 2012 and it’s exactly the 5.5 inch phablet we expected it to be and all leaked specs turned out to be true. The only thing we didn’t expect was a slight decrease in resolution from 1280 x 800 to 1280 x 720. Anyway now we get an official hands on from Samsung, showcasing the features and design traits of this new model.

Rumored to cost $800 free of contract, this device packs a quad core Exynos CPU, 8 megapixel camera and 2 GB of RAM. The device offers a 16:9 aspect ratio and has a curved and ergonomic design. Its CPU is a 1.6 GHz unit, that helps it run Android 4.1 Jelly Bean and the product is said to arrive in Europe, Asia and the Middle East in October. What’s cool is that you can perform search by writing stuff with the S Pen. For example, you write “Berlin weather” and Google will display the weather prediction for Berlin.

There’s also Pop Up Play, that was already famous on the Galaxy S III and there’s a popup S Note option, available with a double tap of the S Pen on the screen, while keeping its button pressed. The S Planner calendar now supports handwriting and the graphics of the video playback on the Note II look fantastic, I have to say that. There’s also an option for clipping parts of images from the web and sending them via text or keep them in scrapbook and create an interesting new multimedia document. More details in the video below: