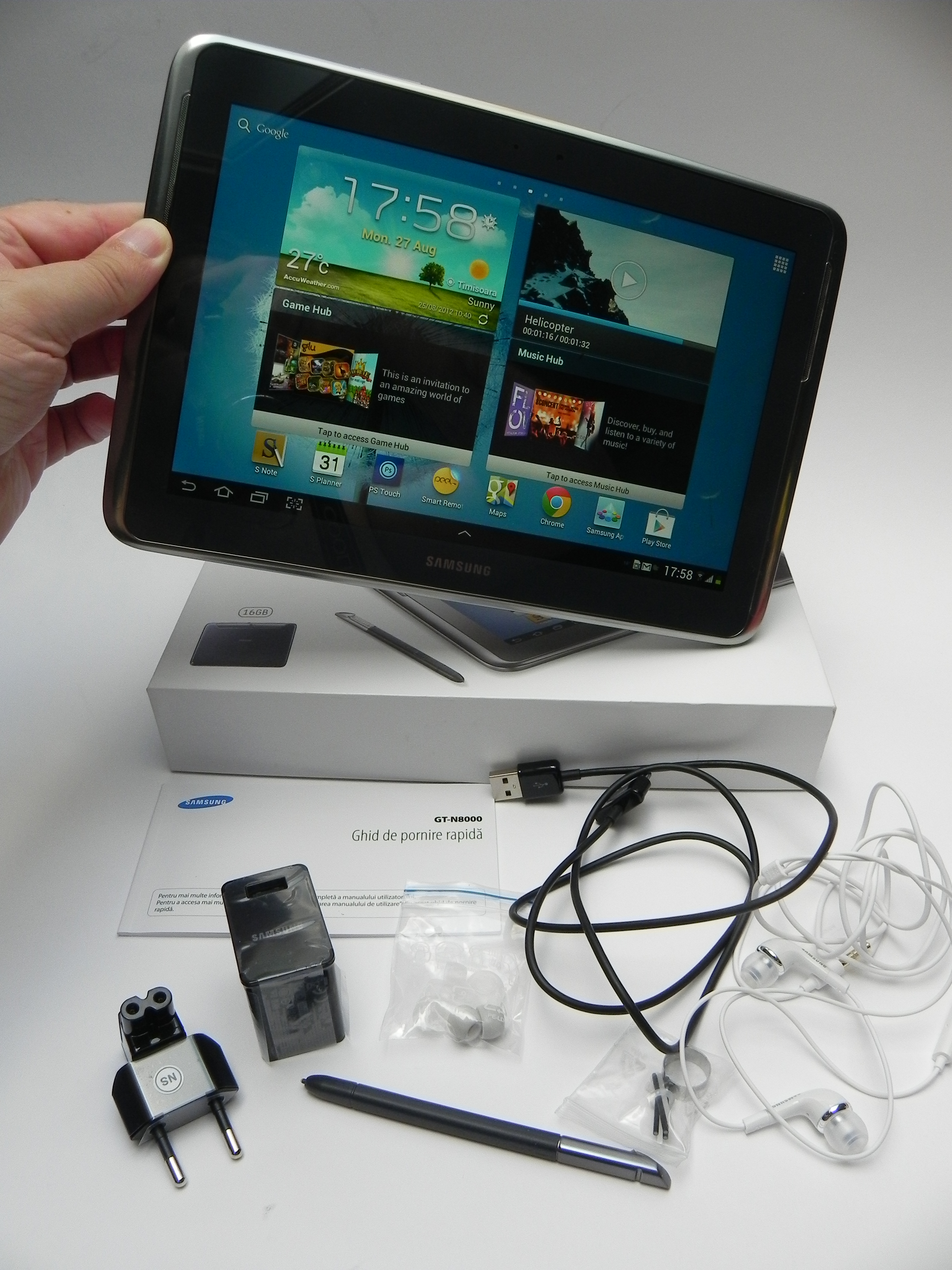 We’ve played with a lot of tablets this year, including hotshots like the Nexus 7, iPad 3 and the Full HD ASUS Transformer Pad Infinity and now the Samsung Galaxy Note 10.1 has arrived on our test table. We analyzed the device and found it to have some very strong areas and also some weaknesses. This is undoubtedly a powerful device, with 2 GB of RAM and a quad core Exynos CPU. It’s priced staring at $500, which is quite good for such a slate. 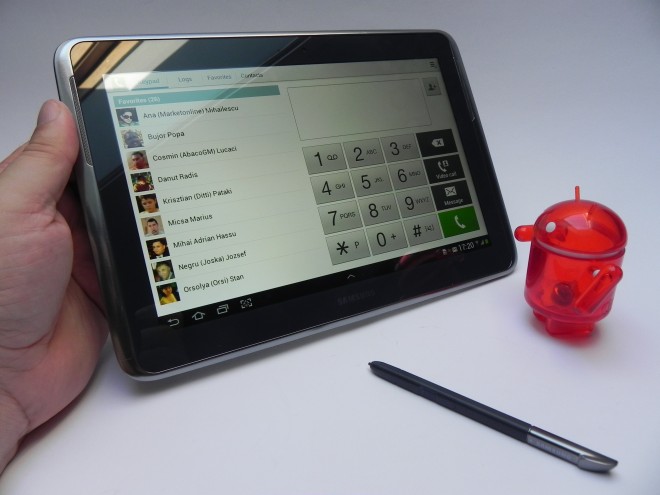 This product was showcased first at MWC 2012, but back then it was inferior, with a dual core CPU and 1 GB of RAM and without a stylus slot. In the meantime it evolved to a quad core device with 2GB of RAM and a more powerful camera, plus stylus slot. Samsung Galaxy Note 10.1 features a plasticky case, that sadly creeks and snaps under the touch of the user and it’s slightly bendable at the back. You can hear that in the video review below. The material at the back reminds me of the Galaxy S III, but slightly with a cheaper feel.

As far as the design goes, Galaxy Note 10.1 looks just like the Samsung Galaxy Tab 2 10.1 and from the distance you won’t even tell them apart. All the buttons and ports, plus the speakers are in the same places. You should know that all the main ports, buttons and slots are on the upper side, including an infrared emitter, SIM slot, microSD slot, audio jack, On/OFF button and volume buttons. At the bottom there’s a proprietary port for PC and charger connection, while at the back we find a 5 megapixel camera, up from the 3 megapixel camera from back at MWC 2012. 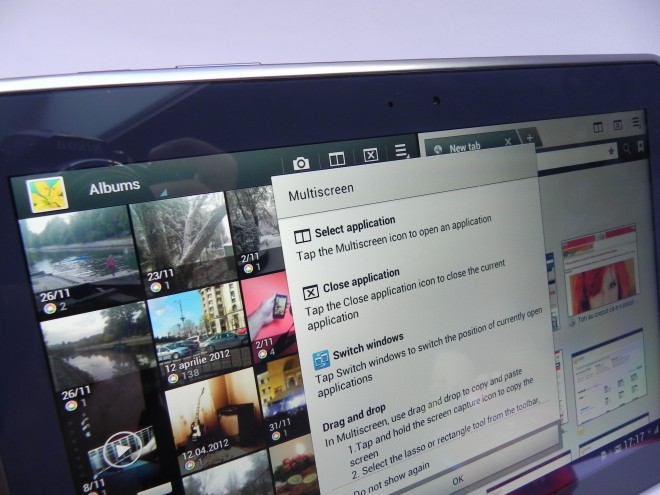 Upfront there’s a 1.9 megapixel camera and also stereo speakers on the side. The tablet measures 8.9 mm in thickness, weighs 600 grams and at the back we find a S Pen stylus slot. As far as hardware goes, we get a 10.1 inch PLS TFT display, with a 1280 x 800 pixel resolution, slightly underwhelming, as we wanted a Full HD panel here, since the tablet is so superior in hardware. The device comes in 16, 32 and 64 GB of storage versions, with HSDPA 21 Mbps connectivity, WiFi, Bluetooth 4.0 and 3 modes of functioning for the screen: Dynamic, Movie and Standard.

Said screen offers bright colours, pretty good brightness, but not so great viewing angles. Also, the sunlight functioning leaves a lot to be desired. The CPU on this model is a quad core Exynos 4412 chipset with a 1.4 GHz frequency. As far as GPU goes you get the Mali 400 MP, the same from the Galaxy S III. Hardware details also include a gyroscope, compass, GPS, accelerometer, GLONASS and the user’s choice of white or black chassis. As far as power goes, there’s Li-Ion 7000 mAh battery, providing 8 hours of video playback and about 1-2 days of normal use, at least that’s how long it latest for me. 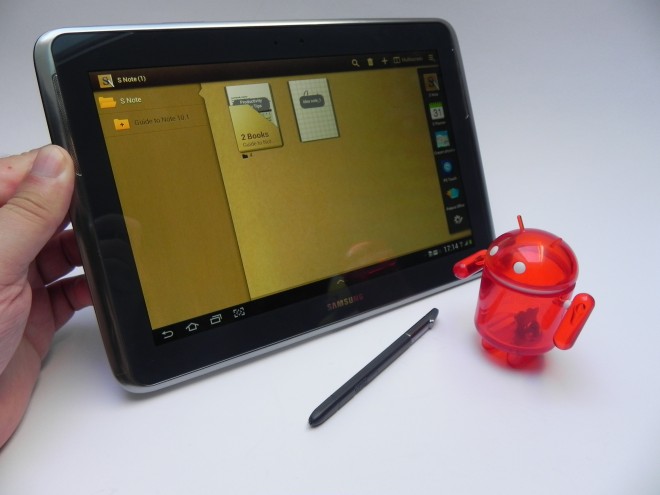 The stylus is now thicker and longer than the one on the first Galaxy Note and offers 1024 pressure levels, much more than the predecessor. The S Pen uses Wacom technology and has a button that’s used to activate certain features, like taking a screenshot or activating the S Note. If you wonder about performance, we scored 5249 points in Quadrant, compared to the 3656 points of the Nexus 7 or the 4600 points of the ASUS Infinity Pad. We also surpassed the ASUS PadFone, that scored 5000 points. In the AntuTu test we got 12.394 points, compared to the Nexus 7’s 10.950, the 11k of the Infinity Pad and the 6000 of the PadFone. In NenaMark 2 we got 58.9 FPS, beating the Nexus 7’s 55.8 FPS and the Infinity Pad’s 34.6 FPS. Only the PadFone beats this product with 60 FPS.

Testing the device with the BrowserMark benchmark we achieved 150.000 points, much more than the Nexus 7, with 123.000 points. Moving on to the multimedia review, the stereo speakers are very impressive, with clear sound, good volume and excellent bass. The video playback offers great brightness, but poor viewing angles and bad sunlight viewing. The camera was actually a pleasant surprise, with LED flash and some very nice photo captures, especially in daylight, since indoors there’s no chance for that.

The 720p capture looks OK, but nothing more than that. We have Panorama available, a couple of photo effects and the usual settings for exposure, white balance, ISO, geotagging and others. And now on the software side, we’ve got the Android 4.0.4 OS with the TouchWiz UI and those famous floating apps we already saw on many Galaxy Tabs. There’s also the Pop Up Play feature from the Galaxy S III, that allows you to minimize the video playback window and do other stuff. Multiscreen is the most famous feature here, allowing you to divide the screen in two vertical areas and work on two apps at the same time, so you can combine web browsing with taking notes, checking email with watching a video and so on.

The keyboard is very comfy and handwritting works great. There’s even a thumb typing method included, that works fine as well. We get the usual Music Hub and Game Hub here, but they’re not much use. There’s also the S Suggest app, suggesting what apps you need to download and the Samsung Apps store, if you want unique application for this Samsung device. For me the S Note app is the selling point of the tablet, with its great ability to recognize math formulae and provide results via Wolfram Alpha. It can also recognize geometrical forms, tables and provides a decent amount of drawing/photo editing and calculus. 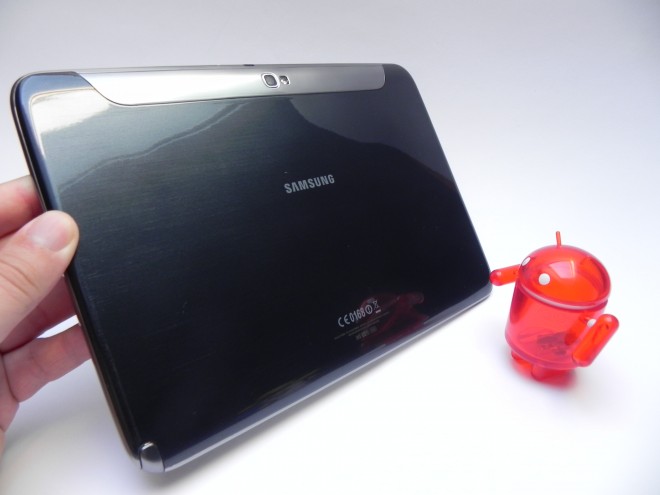 Photoshop Touch is also bundled with the tablet, as well as the Peel Smart Remote app, that allows you to control a TV via infrared. And now for the verdict! On the Pro side of the tablet we’ve got excellent graphics editing with the Wacom stylus, Photoshop bundled, a decent camera, a phone feature, excellent stylus and S Note, multiscreen and multitasking, a great virtual keyboard and very good speakers and headphones. On the cons side we’ve got a plastic creaking case, bad screen (resolution and viewing angles), the same design as the Galaxy Tab 2 10.1 and the lack of a feeling you’re really using a quad core tablet.

We give the tablet a 7 out of 10 for design, 9 for hardware and 8 for OS and UI, for a total of 8 out of 10. I see this product as a tool for a person working with graphics, tables, Math formulae, maybe a University teacher, maybe a graphics designer or an architect.

Google Breakfast Event With Sundar Pichai is LIVE at 4 PM...