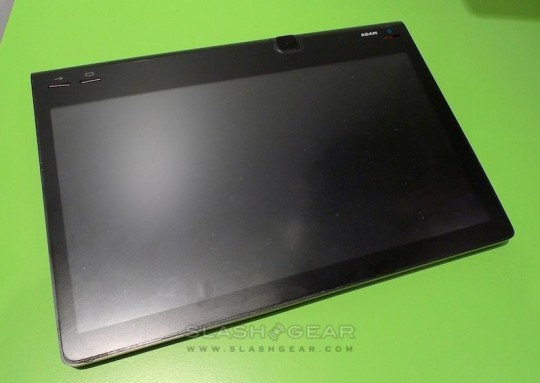 Notion Ink Adam is possibly one of the most delayed products in recent years, but also one of the most appealing tablets we’ve seen in action over the past months. Things have changed during the past months, as far as the slate’s specs are concerned: WiFi b/g support has now turned to WiFi b/g/n, true GPS is also on board and the rotating camera has been improved, with a play that reaches 185 degrees.

Debugging support has also made the cut, as well as OS upgrades via the miniUSB port. Software-wise, Adam gets a custom UI and a content store dubbed Genesis, that should be a “high end version of iTunes”, according to the company’s officials. Genesis integrates an app store, content store, media player, e-book service and much more.

Gaming is also an aspect where Notion Ink Adam rocks, as it comes with Unreal engine support, preloaded games and NVIDIA Tegra technology on board. Multitasking is a go as well and what you must know is that Adam will come in 4 versions, all based on NVIDIA’s Tegra 2 platform. The difference will be made by Pixel Qi and LCD displays and the public’s choice of either WiFi only or WiFi and 3G versions.

Notion Ink says that the device will cost less than the basic iPad, with the LCD version going for $399 (WiFi only) and the 3G model for $449. A $25 discount could be applied at the last minute, if Notion Ink manages to score some deals (with carriers or component makers, maybe), plus universities and students will get their own discounts.

As far as the launch date is concerned, FCC certification will decide that. However, we know that manufacturing debuts in early November, so all odds are that the device will debut in the November 2010 – January 2011 time frame.