Fujitsu launched a new tablet at MWC 2016, the business model Fujitsu Q736, that’s in fact a 2 in 1 business model. It comes with enhanced security, a dual digitizer with support for pen and finger input and an optional keyboard dock.

The Fujitsu Stylistic Q736 is supposed to be “the most secure tablet to date”, according to its maker. It also brings wireless SmartCard support via NFC and advanced biometrics, which means that instead of scanning your fingerprint, it scans the veins in your palm. The company claims that this faster, simpler and more accurate than other solutions.

The palm vein sensor is that beefy thing placed on the side, being demoed below. Hard drive encryption and TPM security are also bundled. Fujitsu included here two different keyboard docks, one with an extra battery and one without. The slate weighs 2.2 pounds and relies on an Intel Core i7 Skylake processor, 4G LTE and GPS.

It ships with Windows 10 Pro and offers up to 9.5 hours of life. It’ll reach stores in March. 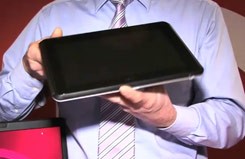