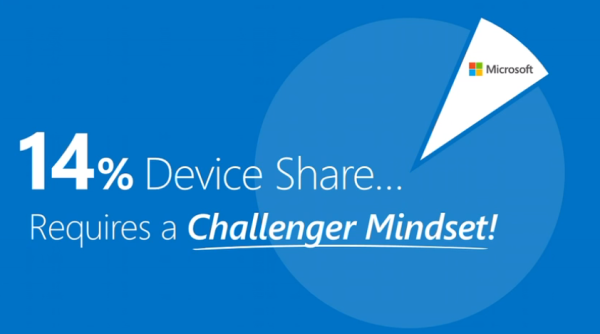 This week Microsoft had a special Worldwide Partner Conference in Washington, that brought together all the decision making people related to the company. Among them there was Kevin Turner, Microsoft COO, who had some very interesting things to say about Microsoft’s market share.

For many years Microsoft was seen as the dominant force of all PC OSes, with over 90% share of the desktops and notebooks. However, those devices are rapidly becoming irrelevant, when everyone wants the newest and best smartphone or tablet out there. MS still has 90% of the PC market, but overall, it only has 14% of the entire devices segment. This includes Windows Phone and all the Windows initiatives, by the way.

Above you can see a slide shown at the meeting and this all follows last week’s internal memo, that CEO Satya Nadella sent to Microsoft’s employees. He was very optimistic about the company’s future, although that memo did include ominous phrases like “involving fewer people in the decision making process”, or something close to that spelled the firings that are about to happen.

Microsoft has a surpluss of employees because of the Nokia Devices purchase and at the same time they’re trying to become more open, more focused on the cloud, on Xbox and on the things that actually work there. Will they manage to reach let’s say 20% of the market by 2016?