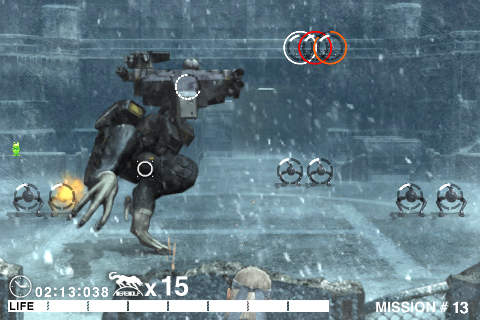 Metal Gear Solid Touch is a very old game, dating from back in 2009, but it’s only in 2014 that we got to play with it, on the iPad Mini Retina. I am a very big Metal Gear Solid fan, so I had to play this, just to check it out.

The game is priced at 1 dollar and it’s a static shooter with very dated graphics. Its content is strongly related to the MGS4 title and it has some story elements included and trademark wallpapers unlockable with achieved points. You play as Old Snake and you tap on the screen to target and shoot at the enemy.

The title has a few levels and you get 50 wallpapers available. There are 20 stages here divided into 5 stages: Middle East, South America, Eastern Europe, Shadow Moses and Outer Haven. You will take on the trademark Gekkos, B&B Corps and face new enemies. You’ll also be able to zoom onto farway targets and get more HP by shooting toy ducks.

Even for 2009 this game feels very dated, but seeing how some modern Android shooters look today, it’s not very bad. That’s why we give it a 6.5 out of 10, because overall it doesn’t quite represent the MGS series properly. You can download it here.