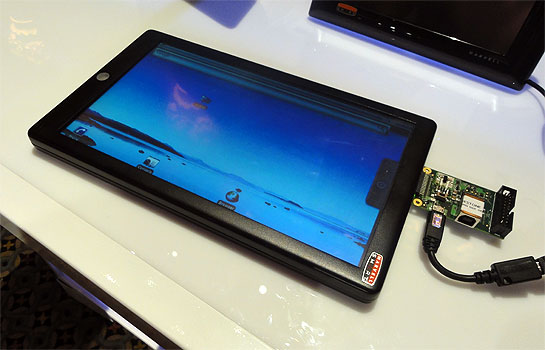 These days there’s another interesting event to attend, aside from Microsoft’s MIX10, the Future of Publishing Summit in New York City. Among the attending companies there’s Marvell, showing off a couple of prototype devices, based on Armada processors, including a reference design of a 10.1 inch Android tablet. Here’s the device:

This is a pretty “fat” tablet, that should become sexier once it’s adopted by another company. Marvell claims that it expects finished products based n this design to hit the market before the year end, probably with a decent price tag, one suitable to compete with the iPad’s $449. Marvell’s device uses a version of Android much like the one on Android phones (Nexus One or Droid), but with a higher resolution display in the mix.

As far as the Armada processors are concerned, this is a low cost and power efficient solution, developed by Marvell and ideal for devices like e-readers and tablets.

DoCoMo Came Up With a White Board Device That Lets You...