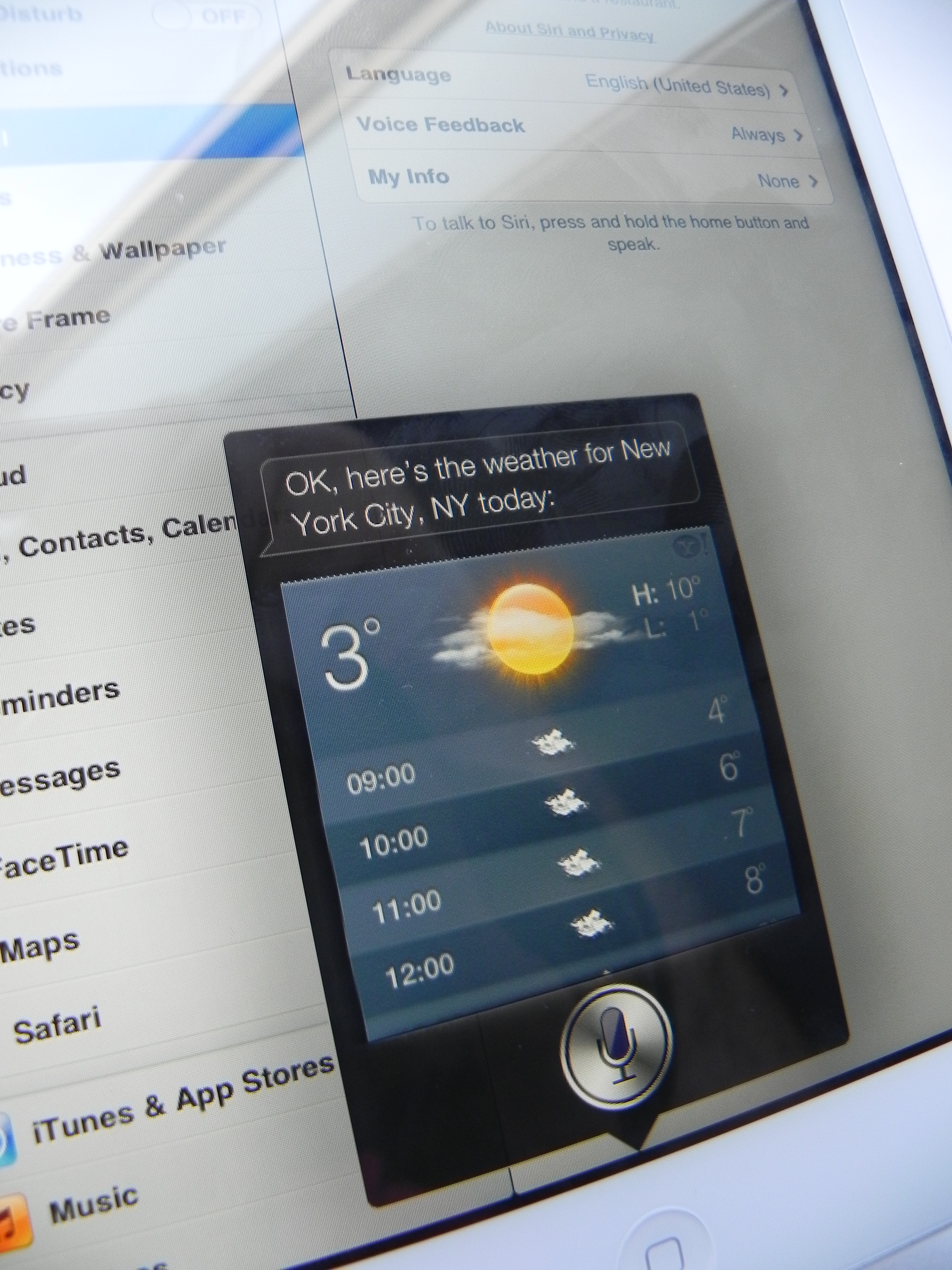 The iPad Mini feels like somewhat of a trick from Apple, as they could have delivered us straight into the age of 7 inch tablets with Retina Displays. They chose to wait and give us a 7.9 inch iPad 2 with a bit of overpricing attached to it. And now we review this controversial product. Is it any good? Certainly, but the best? Not exactly… 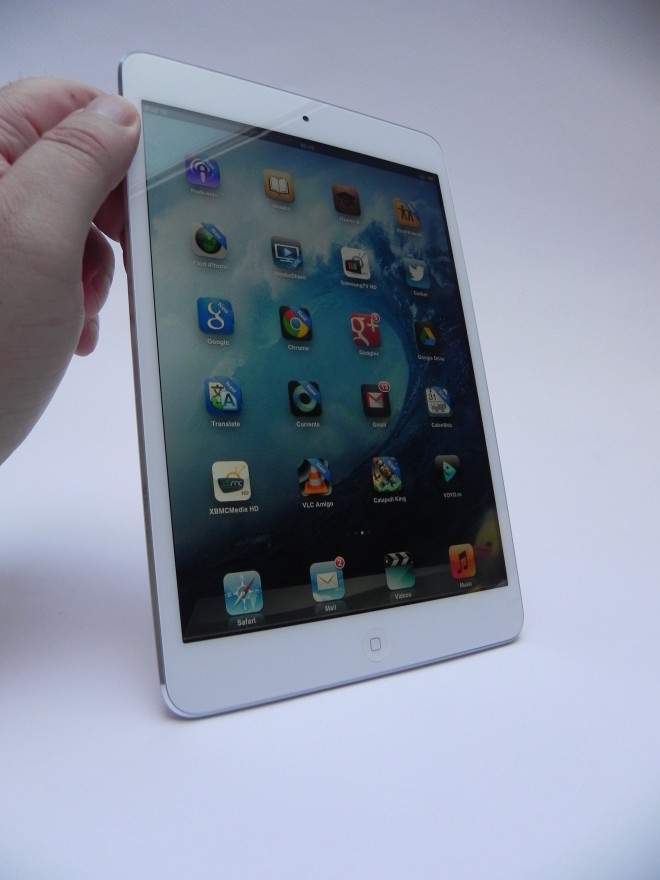 The iPad Mini goes for $329 and it comes in black or white + silver. It was the subject of a ton of leaks before being launched, all of them coming true when this model was announced in October. It hit the stores on November 2nd and was thoroughly reviewed by yours truly in the video below. This is the very first Apple slate with a diagonal other than 9.7 inches. The design reminds me more of a bigger iPhone or even a Galaxy Note, rather than a smaller iPad. The device is very thin and light, weighing 308 grams and measuring just 7.2 mm in thickness, making the iPhone 5 seem fat at 7.6 mm.

Its speakers and Lightning port design reminds me of the iPhone 5 and we’ve also got a metallic case that looks and feels nice. The aluminum design is nothing new for sure, but the entire format of the device seems a bit different in shape, compared to what we’re used to from Apple. We’ve got a 5 megapixel camera at the back without flash and a 1.2 megapixel FaceTime HD shooter. The slate is very wide and can be barely held with one hand. Its screen is a bit of a fingerprint magnet and the Home button feels a tad rigid and maybe a bit too small. 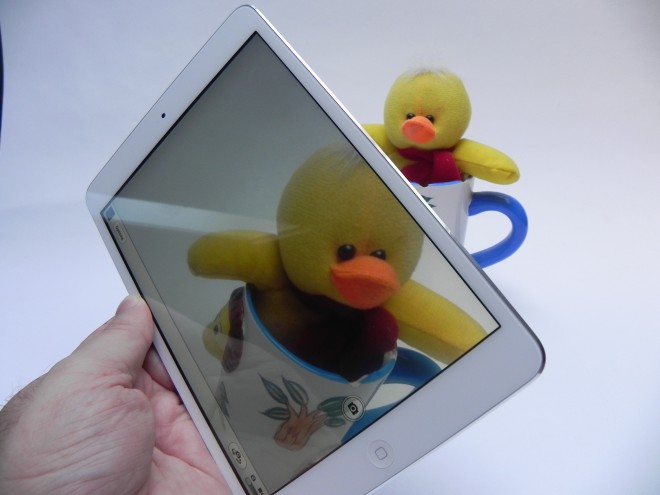 Moving on to the hardware, Apple offers us here a 7.9 inch tablet with 16/32/64 GB of storage, WiFi, Bluetooth 4.0 and a display that supports a 1024 x 768 pixel res, just like the iPad 2. Its screen is an LED backlit IPS LCD with 163 ppi density. Inside we’ve got a dual core Apple A5 processor and at the back there’s a 5 megapixel iSight camera, while upfront there’s a 1.2 megapixel camera with 720p video calling. Inside the tablet we find a 16.3 Wh Li-Polymer battery, that’s a fantastic piece of work. It will easily provide 2 or even 3 days of use, without any kind of hassle.

Other specs include a 3 axis gyro, accelerometer, digital compass, ambient light sensor, 512 MB of RAM and no GPS, remember that. The 16 GB WiFi version we tested doesn’t have a GPS, but the cellular one does. Moving on to the video analysis, we found that the viewing angles are nice, colors are good, brightness is also good, even in sunlight. On the audio side I was quite underwhelmed, with a vibrating back like on the iPhone 5 and an annoying distorsion at maximum volume.

The camera is actually pretty decent for a tablet’s camera, but sadly we’ve got no HDR or Panorama, plus no flash. In good light you can take pretty good pics, but not reaching the level of the 8 MP shooters on ASUS Transformer slates. There’s a video sample below, if you want to see the iPad Mini in action.

As far as software goes, the slate updated to iOS 6.0.1 recently and it comes with a comfy virtual keyboard, that’s actually very nice to use in portrait mode, even more than you’d expect. The browser is also pretty fast and the tabs are easy to close and interact with. You can opt for a split keyboard, for some thumb typing action. Multitasking is done either by double tapping the Home button, or by using a 4-5 finger swipe to move between apps. A 5 finger squeeze brings you Home and no that’s not a euphemism. 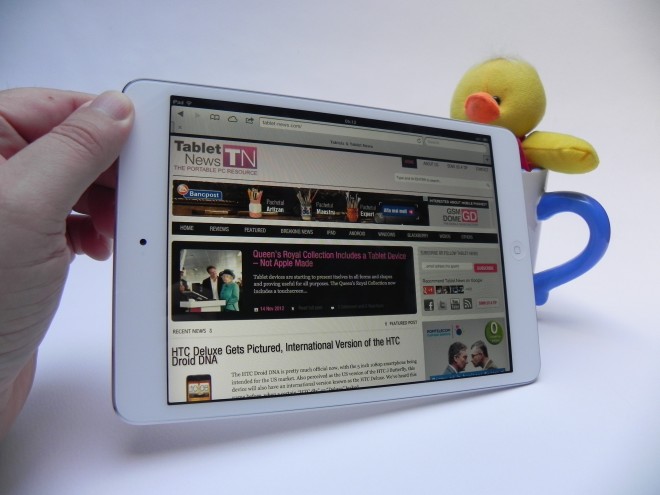 The notification area may feel too petite for the big screen, but it does serve its purpose. Twitter and Facebook integration are present all over the OS, as expected in iOS 6.0. The good thing about the iPad Mini is that it’s very fast, has no lag problems and no handicap because of its older CPU and less RAM than modern slates. As far as benchmarks go, we scored 751 points in GeekBench, while the iPhone 4S scores about 633 points and the iPad 2 750, while the Nexus 7 reaches 1396.

In BrowserMark we had pretty much the same score as the Nexus 7, around 123k, while in SunSpider we scored a mediocre 1552ms, compared to the iPhone 5 920ms (lower is better), but still better than the 1700 ms of the Nexus 7. Finally in Linpack we scored 112 points, while the Nexus 7 scored 174 points. This benchmark measures the speed of ecuation solving on the tablet. Reading e-books on the tablet works just fine and the new format is well suited for e-reading. 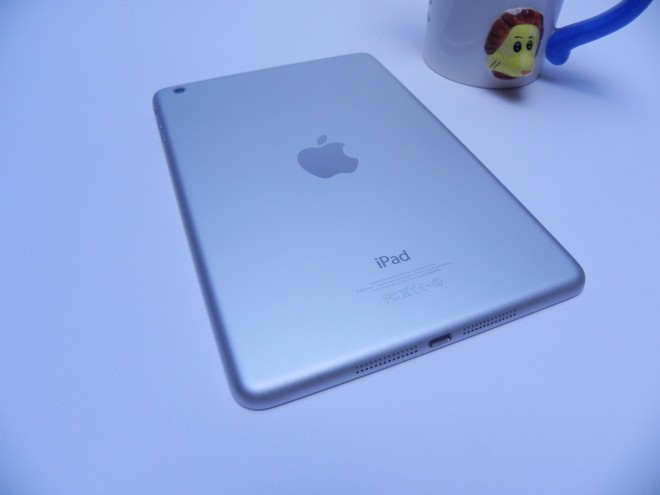 As far as apps go, I’m frustrated by the lack of an official YouTube app for iPAd, but moving on we’ve got Siri doing a fine job here, especially in the new version. You can dictate Facebook statuses and email and open apps with it. The App Store now supports voice search and since we mentioned apps, we played around with more CPU intensive software like iMovie, Pages or iPhoto and couldn’t find a moment of slowdown. Another good thing about this tablet is the dual band WiFi and pretty good WiFi speed, plus the 200k iPad apps available, while the Android slates suffer in that area.

And now it’s time to see the pros and cons of the product, before the verdict.

Here’s the list of positive aspects regarding the slate:

And the negative aspects:

We give the iPad Mini a 9 out of 10 for design, 8.5 out of 10 for hardware and 9 for OS and UI, for a total of 8.83 out of 10. This is a very good tablet, one that’s suited for an iOS avid user who wants a smaller device, but not an iPod or iPhone. It’s highly portable and comfortable to email checking and playing game. If you’re into iOS, you need this device, if you want to spend less… if you’re into Android, Nexus 7 will do just as good.