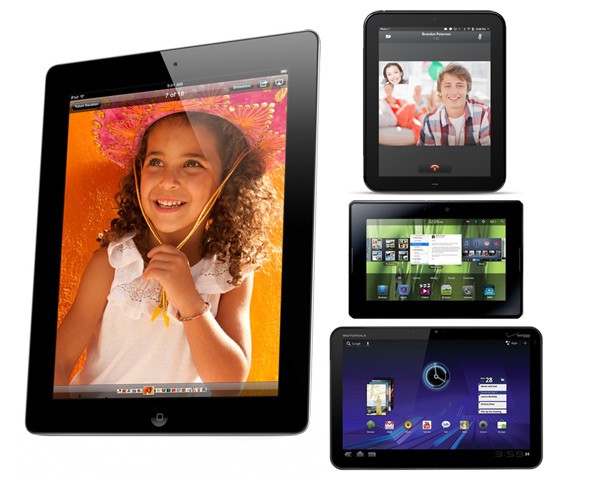 Engadget made a comparison of all popular tablets on the market not so long ago and now there’s one more to include on the list: iPad 2. Thus, the comparison was re-made and you can see it in the table below, if you’re curious. As you can see, we have one unit for every platform out there: iOS 4.3, Android 3.0, webOS 3.0 and BlackBerry Tablet OS (QNX).

The smallest of the bunch is the PlayBook, with its 7 inch diagonal LCD screen, while the HP TouchPad and iPad 2 offer 9.7 inch displays as alternatives. Motorola Xoom tops the pile of slates with a 10.1 inch diagonal display and the biggest resolution of them all, 1280 x 800 pixels. The new iPad supports 1024 x 768 pixel resolutions, shown on its LED backlit IPS LCD.

It’s interesting to see how things have evolved in just a year of tablet madness…. All of these models are dual core units, with iPad 2 using the A5 CPU, while Moto Xoom goes for Nvidia Tegra 2 and HP TouchPad opts for the 1.2GHz Qualcomm Snapdragon. The BlackBerry PlayBook uses a TI OMAP4430 processor to run its QNX OS. 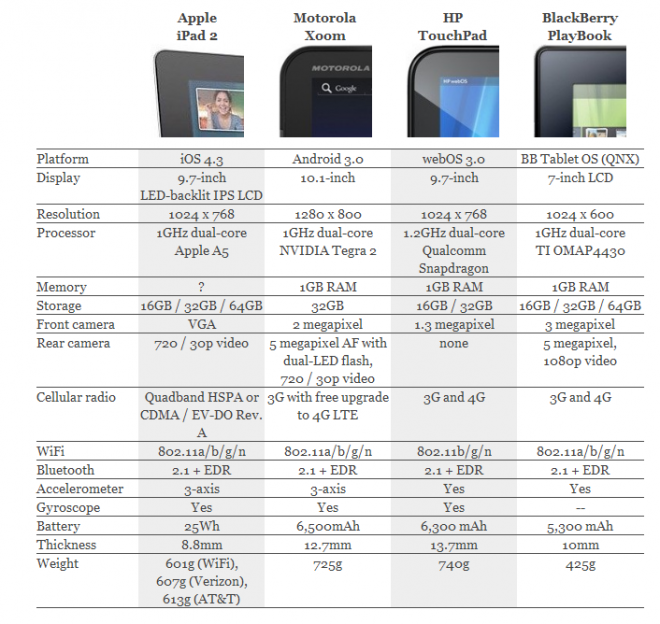 Interestingly enough all models come with 1GB RAM, beside the iPad 2, that has an unknown quantity of RAM, although some say it could be 256MB, although that sounds disappointing. Connectivity-wise, the Xoom is the best, supporting a free 4G LTE upgrade later, while the rest of the devices come with 3G and 4G, plus quadband HSPA or CDMA-EV-DO Rev. A for the iPad.

More can be found in the table integrated in the article. Right now, the Xoom looks like the best choice, although its price is quite big at $800…