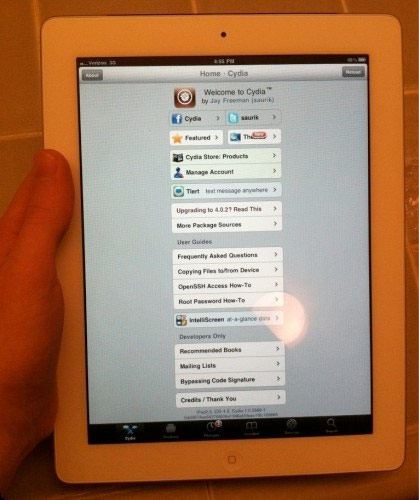 The folks of Engadget were among the first to discover that the iPad 2 jailbreak has been leaked and this seems to be the one they tested back in March. Well, there was a video posted with details about the hacking process, but now it’s gone, since it’s not quite self to perform such software tweaks yet.

JailbreakMe 3.0 is now available on the iPad 2 and it was leaked by a beta tester apparently. This is NOT The final build, so maximum caution is advised. This only works for iOS 4.3, so if you’re the user of an updated iPad tough luck for you. Multiple reports are coming in saying that the jailbreak applies to the above mentioned iOS flavor and the 4.3.3 users are stuck with waiting.

Update:  Well, in spite of what Engadget are saying, Redmondpie have posted the video below in their article and they say that the iPads with iOS 4.3.3 also support the jailbreak. You’re only required to launch Mobile Safari and navigate to the URL shown in the video. Next up Safari will close and you’ll see a Cydia icon in the Home screen with a progress bar.

When the Cydia icon appears it’s time for a reboot. After the reboot, you’re officially jailbroken! Voila!