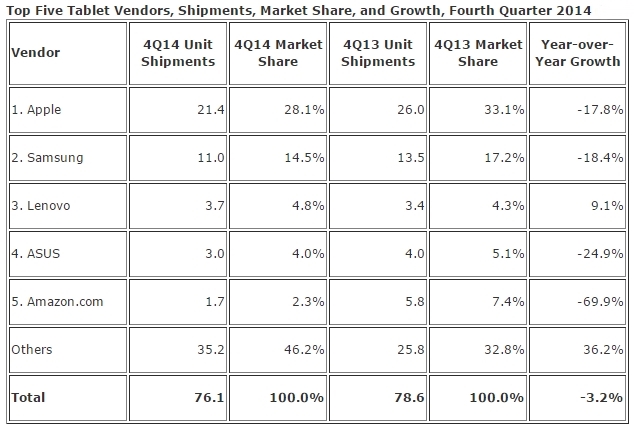 After in November last year, the research company IDC revealed some speculation about the tablet sales in the 4th quarter of 2014, now they are showing up the full numbers for the period remembered. By revealing these numbers, the fears of analyst come true unfortunately.

As we can notice by taking a look on the table above based on IDC numbers, the only one producer that managed to record a growth was Lenovo, company that shipped 3.7 million tablets in the fourth quarter, with 9.1% more compared to the numbers from the same time period in 2013.

Among the producers that experienced major losses of tablets sales in this quarter we have in the first row the guys from ASUS, company that shipped with 24.9% less tablets compared to the numbers from the same quarter in 2013. After Asus, there’s the South-Korean producer Samsung that in spite of the large numbers of tablets brought on the market, the growth didn’t happened, being recorded a fall with 18.4% of sales.

Last, but not least, we also notice that Apple had a bad sales quarter, this one being represented by the total shipment of 21.4 million tablets, number with 17.8% less that the situation from Q4 2013, moment when Apple managed to sell 26 million iPad slates.

The same thing we see when we take a look on the situation of all the data from 2014, Lenovo finding itself in the top of the list with a annual growth of 43.5%, followed by Samsung with 1.1%, and Asus, company that shipped with 4.4% less tablets compared to 2013. In the same time we notice that Amazon.com sold with 66.4% less tablets in 2014 compared to previous year.

This situation showed up above is mainly due the fact that tablet devices have now a longer life cycle, these ones being change once every few years, and not every year as it happens with a smartphone. Also, the launch of big phablets like Nexus 6 led to reduction of tablets sales.