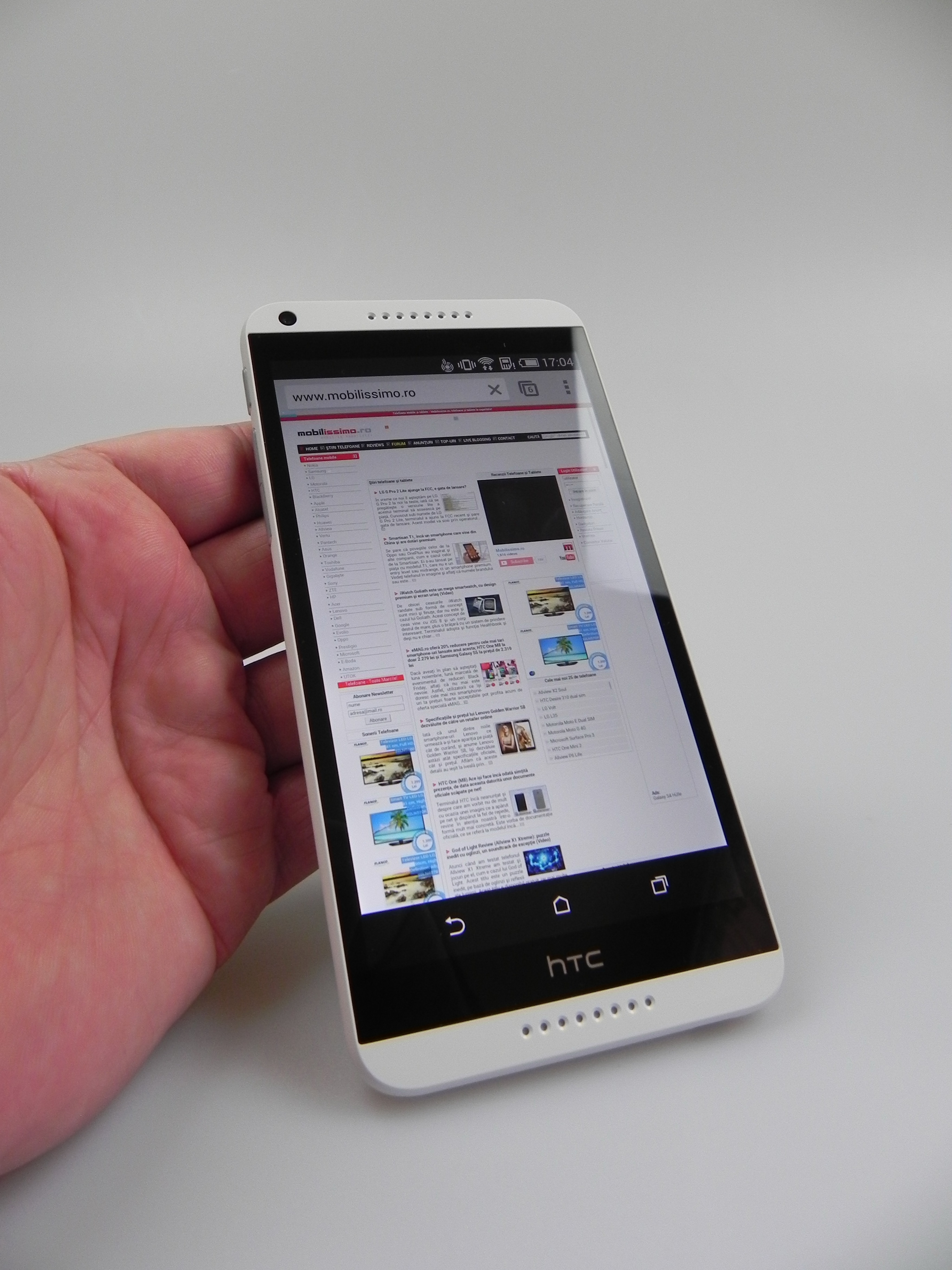 HTC Desire 816 has reached us in its dual SIM version, for a fully detailed review, shown below. This one is a 5.5 inch phablet with an OK price and this product was unveiled back at MWC 2014, so we’ve known about it for a while. This is supposed to be the best HTC midrange phone ever and the motor of the HTC growth in the first half of the year. 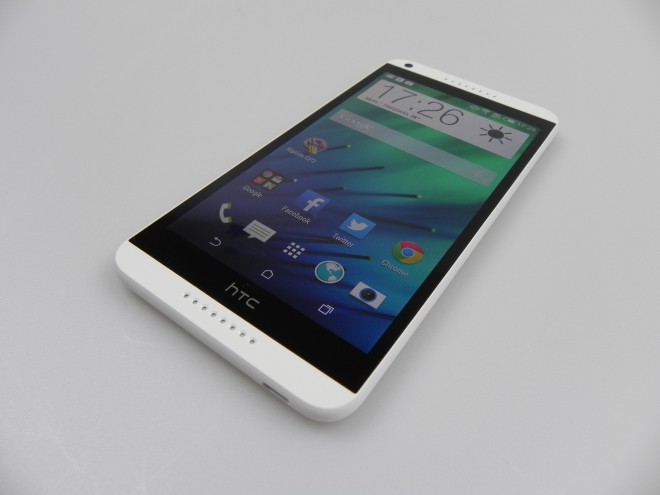 The device is priced at 379 euros on Amazon Germany and its design involves a plastic glossy case, that’s theoretically slippery and practically not, because of its size. The design involves straight lines, subtle curves and this handset measures 8 mm in thickness. It weighs 165 grams and it’s a solid and resilient product. The buttons offer good feedback and the sides have a rubbery feel to them, for extra grip.

Upfront on the HTC Desire 816 there’s a front camera, speaker holes at the top and bottom, while at the back we’ve got the camera and flash. At the top we’ve got the audio jack and microphone, while at the bottom there’s the microUSB port. On the left side there are the physical buttons, the volume and On/Off, while on the right side there’s a lid, covering up the dual SIM card slot, made of two nano SIM slots, plus a third slot, the microSD one. 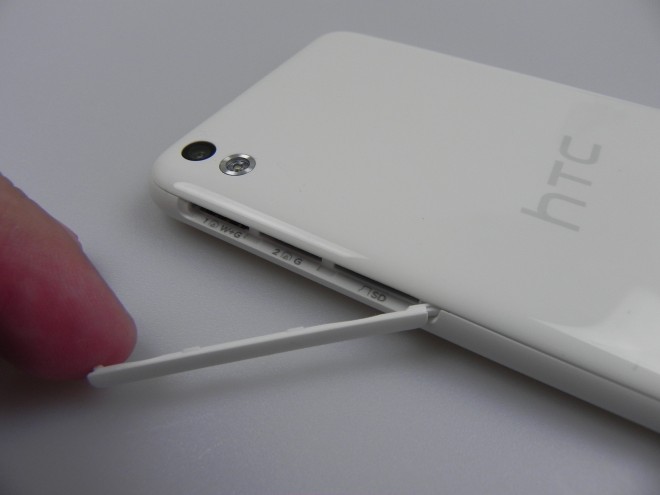 The lid feels a bit flimsy and fragile and the bezels of this handset are a bit thick, but for this price I’ll take them. The smartphone looks OK, but it’s less beautiful than a Galaxy Note for example, but it’s certainly prettier than the Huawei Ascend Mate phablet. As far as the specs are concerned, we get a 5.5 inch display with 720p resolution and Super LCD 2 technology. Inside the handset there’s a quad core Snapdragon 400 1.6 GHz CPU, 8 GB of storage, 1.5 GB of RAM and the microSD card slot can host up to 128 GB of extra storage.

The back camera is a 13 MP BSI unit, while the front one is a 5 MP BSI one. On the connectivity side we’ve got HSPA+ with 42 Mbps download speed, 4G LTE, GPS, Glonass, Bluetooth 4.0, WiFi, DLNA and microUSB 2.0. The GPU is an Adreno 305 and upfront we’ve got stereo BoomSound speakers. Finally, there’s also an accelerometer here, a digital compass, a proximity sensor, ambient light sensor and FM radio. 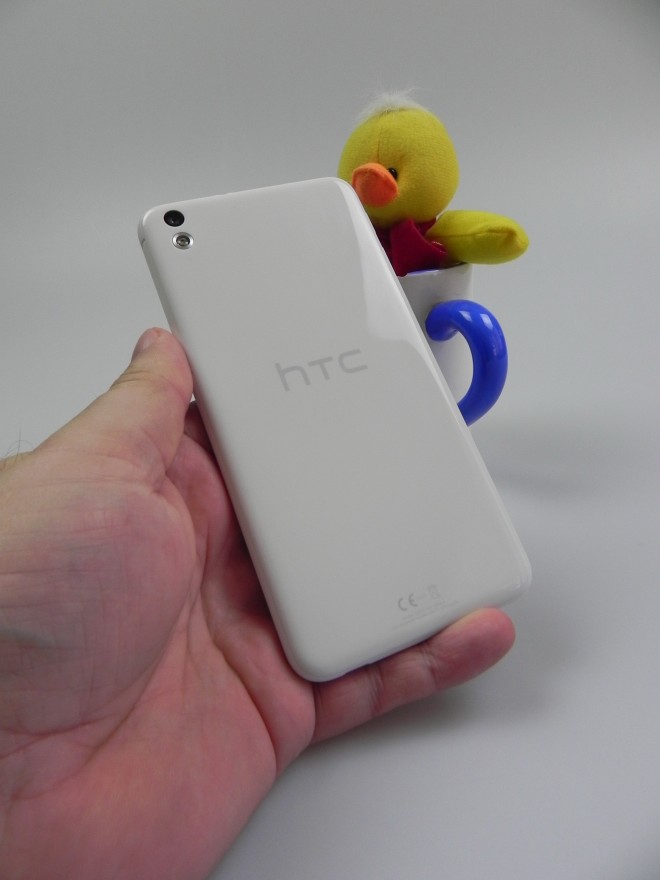 The battery is a non removable Li-Po 2600 mAh unit, that on paper provides 737 hours of standby and 21 hours of 3G talk time. Our HD video playback test with WiFi on and brightness at 50% offered 7 hours of and 44 minutes of functioning, which is pretty decent, considering the screen size. Overall, you’ll get a day, or a day and a bit of functioning from this model. The charging takes quite a while, about 3 hours and half actually. There’s also a power saving option in the Settings Area, that reduces CPU usage, reduces brightness and turns the data connection off when the screen is off.

We also find the Fast boot option in this area and there’s the famous Extreme Power Saving included as well. You can choose what battery percentage triggers it and reduce CPU frequency, brightness and connectivity with it. Once you enter the Extreme Power Saving mode, the UI gets simpler, multitasking is disabled and only the basic features are available. And now we move further, to the acoustics, that are stellar. We’ve got BoomSound speakers here, with amplifiers and a front stereo audio experience. The volume is high, with the speakers being very loud actually. 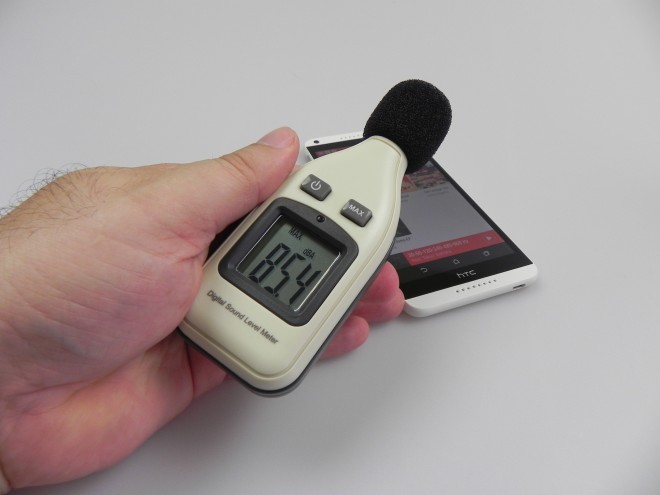 We’ve got a cute visualizer in the HTC music player, but no EQ sadly. Bass is also good, the sound is clear, but in spite of the quality, this model has yet to reach the strength of the HTC One M8’s audio. The preinstalled player does FLAC and in our decibel meter test, we scored a very good 85.4 decibels. In the settings you can turn the BoomSound effect on or off, but that only applies to the headphones and adds a bit of punch (bass) to the sound.

The headphones bundled with the device are actually too loud, so keeping them at 80% volume is more than enough. They’re also not very comfy and finally they enable the FM radio playback, as shown in the video review. And now, the screen! This one is a 5.5 inch screen with a 1280 x 720 pixel resolution, 267 ppi density and a Super LCD 2 panel. HTC didn’t install a video player here, so you must only rely on the gallery and that’s it. The screen offers good view angles, realistic colors and it’s a bright, crisp display with good contrast. 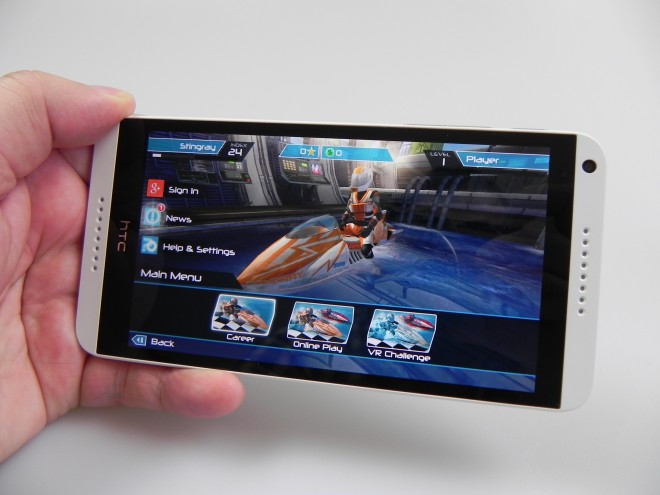 This screen doesn’t have Gorilla Glass protection, by the way. We measured the brightness and achieved 362 LUX units, which is pretty good. The display offers RGB Stripe pixels and it’s almost equal to the flagship Xperia Z2, that has 366 lux. This is well balanced screen for the price and it does its job perfectly. And now the camera, the real surprise here! We’re dealing with a 13 MP unit with BSI and 28 mm lens, with F/2.2 aperture and 4:3 sensor. There’s no ImageChip technology here, we have a single LED flash and there’s a 5 megapixel front camera with wide angle lens.

Now getting to the UI of the main camera, there are the flash options in the upper left side and the main options in the lower left side. The capture modes are placed in the lower right (Camera, Video, Selfie). The Capture type includes Auto, Night, HDR, Panorama, Anti Shake, Portrait, Landscape, Backlight, Text and Macro. The camera does ISO of up to 1600 and comes with options like exposure, white balance and effects like distorsion, vignette, dots, mono, country and vintage. Settings include Make Up Level, contrast, saturation, sharpness, crop (16:9, 4:3 and 1:1), as well as resolution. You can choose 4224 x 2368 in 16:9 or 4224 x 3120 in 4:3. 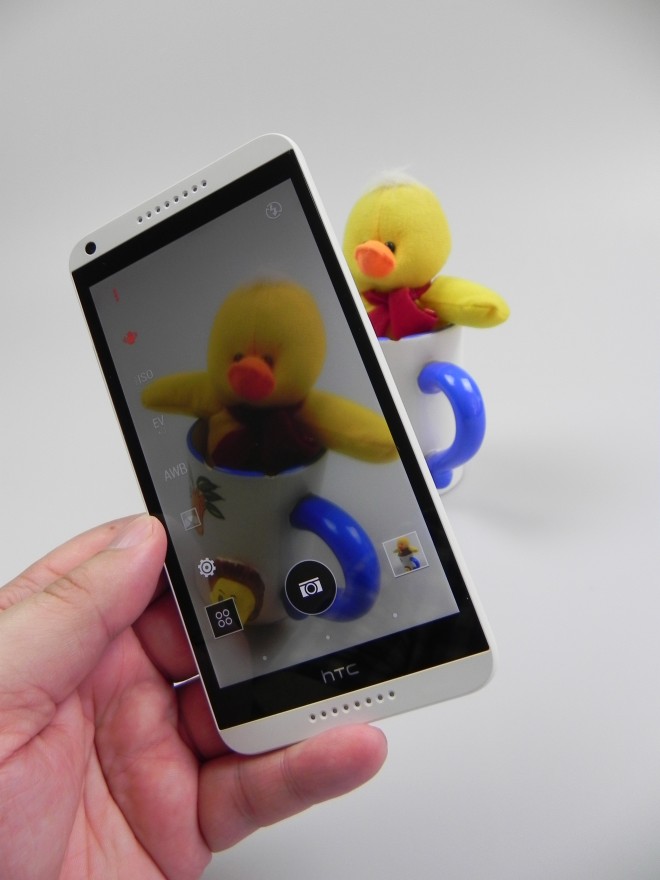 There’s also a Self Timer, continuous shooting and auto smile capture. This is not a very fast cam, as you can see, but its does its job. The video options include normal, slow mo or 60 FPS 720p capture. You can tweak the EV, ISO, effects, white balance and more for the video capture, that goes up to Full HD in resolution. The selfie options include auto/portrait, countdown (2/5/10 seconds), exposure, white balance, effects and crop, plus Full HD video.

Analyzing the pictures I’ve taken with this camera, I found the colors to be vivid, brightness to be good and the pictures look crisp and have good exposure. Macro looks fantastic, as shown by the small red rose picture and a few more shots. Panorama is also demoed and I even played with the effects a bit. The noise wasn’t visible in the pictures and sometimes we even got flagship quality and some day time shots even dared to look better than the HTC One’s or even the M8’s.

HDR is also good and this is one of the best midrange phone cameras out there. Zoe is present merely as a mixture of the content, with audio background and a theme, not as a special capture mode. Picture editing includes filters, frames, effects and tools and now let’s discuss video. You can film in Full HD at 30 FPS and the result is a crisp video, with good colors, good focus and not so good stabilization. There’s 720p 60 FPS filming, slow motion at 120 FPS as well and this is the best HTC Desire camera ever. The vids are a bit oversaturated and offers a bitrate of 20 Mbps.

The audio bitrate is 192 Kbps and we get stereo audio, by the way. This is a very good camera for a midrange smartphone, that’s my conclusion and that’s why I call it a pleasant surprise. The maximum temperature reached by this model is 43.8 degrees Celsius, which means there’s a slight overheating at the back, but not an exaggerated one. The web browser is fast and the settings area includes Advanced and Accessibility with a ton of options. The keyboard is comfy and well spaced, as seen in the video review. Regarding the phone calling, the call is loud and clear and the voice is natural.

We also did some benchmarks on this model, that I compared with the Sony Xperia T2 Ultra, since they belong to the same category and also to the Evolio X6, since it’s a phablet with a similar price and a CPU that’s a bit better than the Snapdragon 400. In Quadrant, we scored 12736 points with the HTC Desire 816, beating the Xperia T2 Ultra and its 9600 points, but being beaten by the 15k points of the Evolio X6. In AnTuTu we got 21272 points, once again beating the Xperia T2 Ultra by about 2000 points but scoring below the Evolio by about 5000 points. 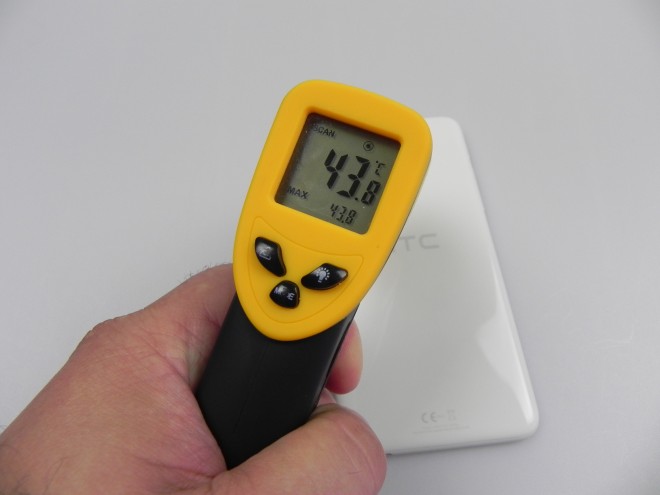 This device can battle the performance of the Xperia T2 Ultra easily and it’s only slightly inferior to the 8 core Evolio X6. HTC Desire 816 runs Android 4.4.2 KitKat with HTC Sense 6.0 on top, which is a minimalist UI with flat icons. We get most of the HTC One M8 experience, but without the special gestures. We still get BlinkFeed, that can aggregate info from Facebook, Google+, Instagram, Linkedin, Twitter and Zoe, plus ESPN, MTV and Associated Press, to name just a few. You can also find Tablet News articles here, by the way and as usual, I consider this superior to Flipboard, thanks to the intuitive UI. 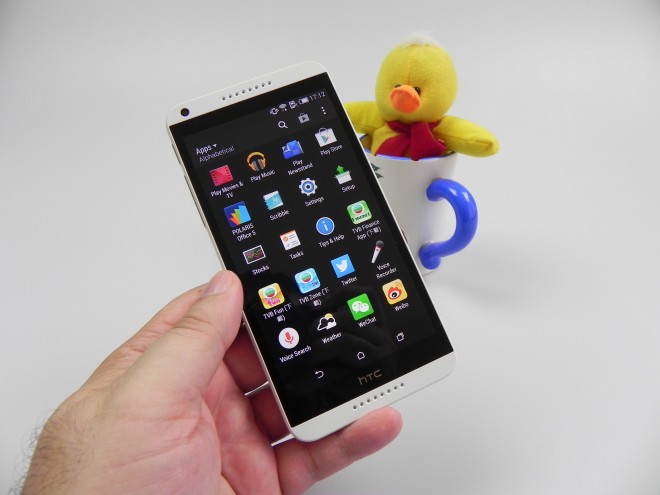 The multitasking window shows 9 apps running at the same time and you can swipe them up to close them. The notification area can be switched to a collection of toggles and those options include HTC Mini+ among others. This one is a device that can serve as a remote for this smartphone and also as a mini phone. The UI of the HTC Desire 816 involves a dock area that’s omnipresent on all homescreens and includes Phone, Messages, Apps and Web. In the Settings area you’ll find dual SIM options and a special Easy Mode, that may be useful for elderly folks or people with sight issues.

We’ve got virtual Android buttons here, not capacitive ones like on the HTC One models. By the way, you can remove BlinkFeed as one of your homescreens, if you want. And now let’s see the preinstalled apps on this device! We’ve got Mail, Calendar, Zoe (Coming Soon), Kid Mode, Car Mode, HTC Guide, People, Scribble (draw, clipart, scribble and mess around), Google Drive (with 50 GB bundled), Polaris Office, Tasks, Stocks, Weather, Voice Recording and Parent Dashboard.

And now here are the Pros and Cons of the device: 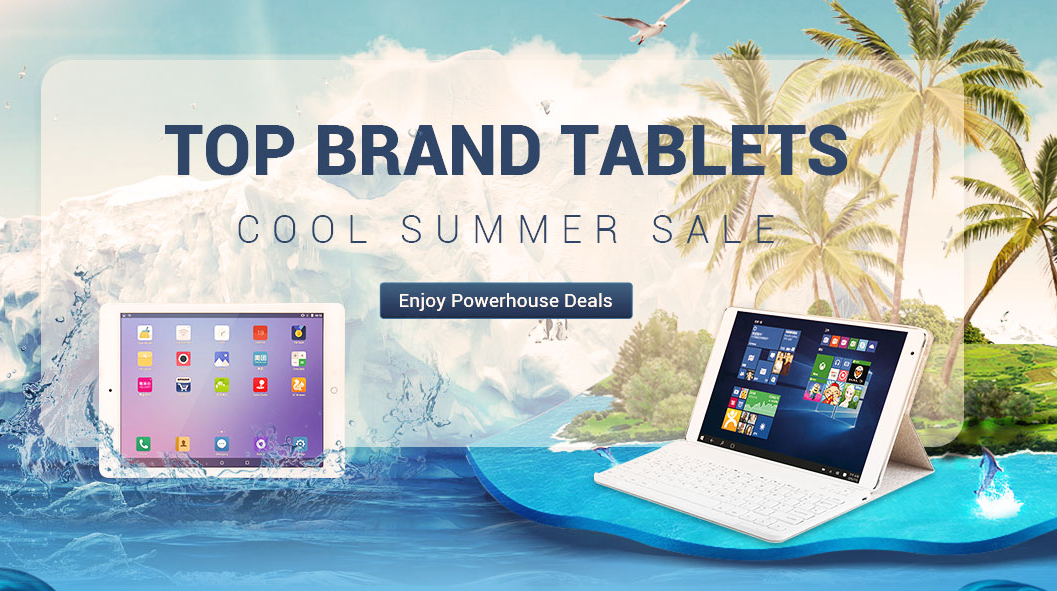 GearBest.com Starts Summer Sales for Tablets, With 2 in 1 Models...