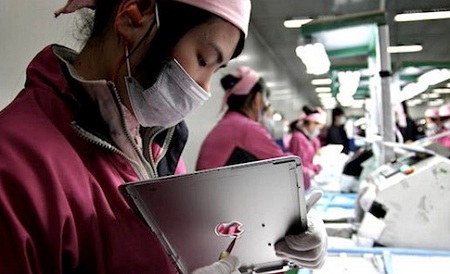 After the folks of This American Life fabricated a story about the working conditions in a Foxconn planted, they retracted the story and now it’s time to get a REAL View into the factories. What we have here for your is some interesting reporting from Marketplace and Rob Schmitz.

The video was done to showcase the working conditions at the Foxconn plant. Rob became the second reporter to take a video crew into the backstage of the plant making the iPad, after ABC News and Bill Weir visited China with the same purpose. Now we find out that each morning hundreds of new employees show up from many miles away to get hired at Foxconn. They have travelled a lot to reach here, some from remote parts of China. Sadly, this separation from the families and distance makes many people quit Foxconn after a while. That’s why the company has considered opening new factories in more remote areas.

As you can see, many of the employees are young and the report says that the production line has some codes associated to each segment, so if a product is faulty the entire production line in that area is stopped and checked. We’re also shown a football field and the way the employees relax. Also, it appears that they work for about $14 a day and get double the pay after a couple of years of work. So, it seems that working conditions aren’t that bad… or that’s what we’re shown here.

First Apple Foldable iPhone Pegged for 2020 Debut, Could Function as...