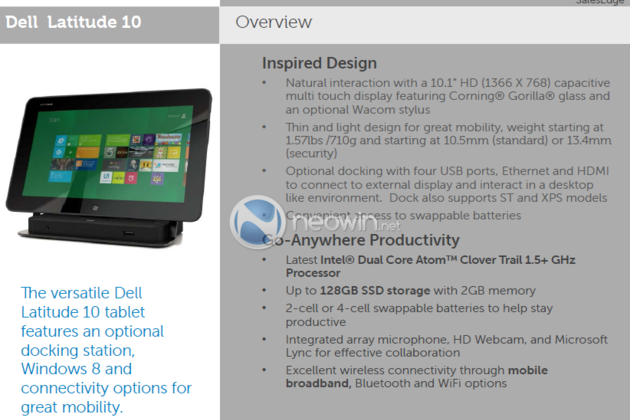 We’ve heard a while ago about two interesting Dell tablets with Windows 8 on board: Dell Latitude 10 and XPS 12. These are apparently not the first attempt at making a Windows 8 slate from the part of the company, as a freshly leaked piece of info details yet another new device, this time based on Windows RT.

Neowin has new information and they’re confirming with multiple sources that Dell hope to launch their first Win 8 tablet in October. It appears they’re having trouble getting Windows RT to a testable state. October is around the time frame when Windows 8 was promised to appear and Dell’s device could pop up exactly when the OS debuts. At some point in time there were rumors that the Windows RT version will be delayed, compared to the standard Win 8, but those were unfounded.

Aside from that initial Dell Win 8 slate now we have fresh info on the Dell Latitude 10, as shown in the slide above. This product will come between November and January and it will include an optional docking station with 4 USB ports, Ethernet, HDMI and even a stylus bundled. The tablet is supposed to a 10.1 incher with Gorilla Glass protection, weighing 710 grams and offering 2GB of RAM, plus up to 128 GB SSD storage.