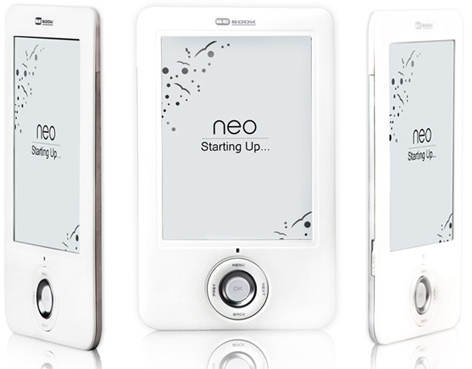 BeBook has just announced that it has started taking preorders for the BeBook Neo e-reader. Said device features a 6 inch E Ink panel, but it also uses a Wacom touchscreen and it supports WiFi connectivity, so you won’t regret the lack of 3G too much.

Also, you should know that the software on BeBook is smart enough to recognize the location you punch in and show the ebook retailers around. Wikipedia and Google are also available on this e-reader, also a sketchpad app and support for ePub, PDF (DRM or not), TXT and many picture formats.

BeBook Neo’s battery life is decent enough, lasting up to 7000 page turns and there’s also a Freescale processor on board, making the device 2.5x faster than its rivals. You also get 512MB of onboard storage, an SD slot, USB connectivity and a 3.5mm audio jack. The price is $453 and preorders are available starting now, with general availability scheduled for February 2010.