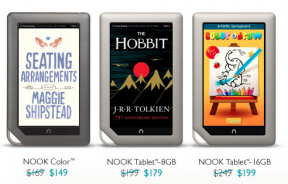 Barnes & Noble has been competing well with the Amazon Kindle Fire so far and since it heard that there’s a new Fire coming, they went ahead and reduced the price of the Nook Tablet. Thus, the 16GB version goes for $199 now, $50 off the older price, while the 8GB Nook is now down to $179, a $20 price reduction.

The Nook Color can be bought for as low as $149 now. Since we’re already in August, the back to school time frame is close, so students will be looking to buy a new tablet and B&N wants to provide that. The company is already famous with pupils and students, so it wants to expand on that popularity. Meanwhile, we’ve also got the Nexus 7 tablet, selling so well because of the low price of $200, so Barnes and Noble had to make a move to counter both Google and Amazon.

Amazon also slashed the price of the Kindle DX last week and the Kindle Touch 3G was made unavailable on the online retailer, making room for fresh products maybe. Sources say that we should expect a new Kindle unveiling next week, but take this with a grain of salt. Since there’s no press invitation I can’t really say if we’ll have a launch or not.