It appears that Asustek is having an excellent year, so after selling so many ZenFones it’s time for some recognition. Thus, we’re not quite surprised to hear they’re Taiwan’s biggest global brand in 2015.

The brand value of the company is at around $1.780 billion, according to the Ministry of Economic Affairs (MOEA) in Taiwan, quoted by Digitimes. ASUS achieves this status for the third year in a row and the analysis was done by the Taiwan Institute of Economic Research, as well as UK-based firm Interbrand. Brands were valued based on an international appraisal system.

The top 20 largest Taiwanese global brands have a total brand value of $8.956 billion, a growth of 2.6% on year. In case you’re wondering, Acer is fourth in the top 10, HTC is sixth and MediaTek is 9th. While giving up on some older products like the FonePad, PadFone and Transformer Pad, ASUS did come up with the ZenPad units this year and we’re still waiting on their sales numbers. 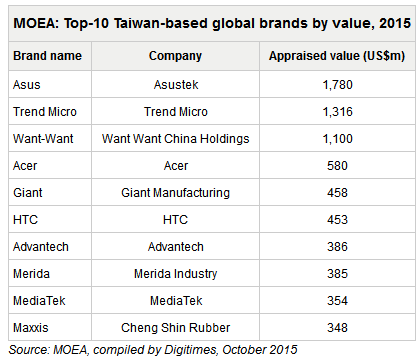