The ASUS Transformer Pad TF103C is a tablet unveiled at Computex 2014 and this device arrived on our test table right after its announcement, so it’s as fresh as they come. We’re dealing with the first 64 bit Intel Android tablet that we ever tested and also the first Zen UI device I lay my hands on. This is a 10 inch slate with bundled keyboard dock, with a price of $300 on Amazon. 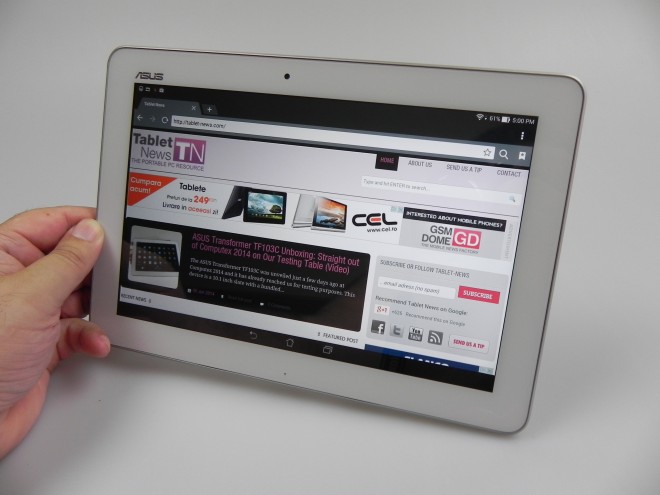 The tablet comes in black or white and it measures 9.9 mm in thickness. It weighs 550 grams and together with the dock, it should be around 20 mm in waistline. With the two combined the weight of the “laptop” reaches around 1100 grams, which is not exactly bad for this combo. The slate is all plastic, but the back texture is truly something special, feeling like a combo between ivory and eggshell, as far as texture goes.

The r is actually a bit heavier than it looks and it has what appears to be a metal frame all around it (although in the end it could be plastic, but I can’t confirm or deny that). We get a solid build, big bezels to rest your hands on and upfront you’ll find the camera and display, while at the back there are the speakers, camera and logo. On the right we’ve got the audio jack and on the left lays the microSD card slot, volume buttons and microUSB port, used for charging. 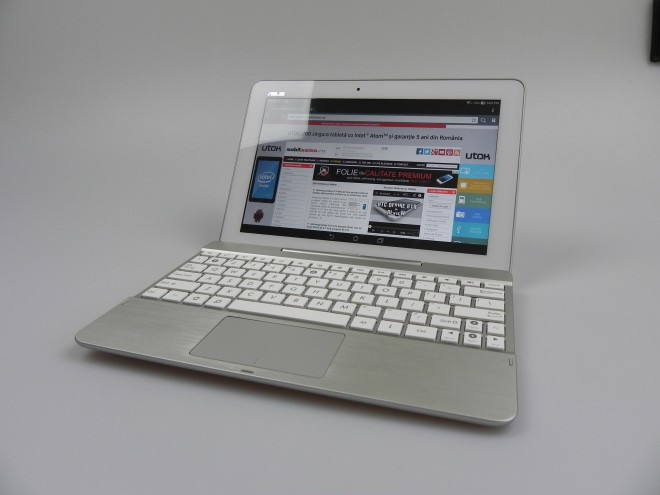 At the top there’s the On/Off button and microphone, while at the bottom we’ve got the holes for the docking mechanism to clamp to. There’s a new docking system, that makes it even easier to remove the dock, just by pressing a single button. It’s also more efficient. The dock uses a chiclet keyboard, it’s comfy and has a good touchpad. It also offers some nice shortcut buttons at the top and integrates a USB 2.0 port, but what it lacks is an internal battery for some extra juice to the slate.

Overall the design feels nice, which is something that ASUS has accustomed us to, but the evolution is only felt in the dock, while the tablet sticks to pretty much the same design as the last two or three Transformer Pad generations and frankly speaking, we need something new. On the hardware side, we’ve got a 10.1 inch IPS LCD screen with LED backlight, a 1280 x 800 pixel resolution and 10 finger multitouch, as well as anti fingerprint coating, that doesn’t quite work, as you can see in the video review. 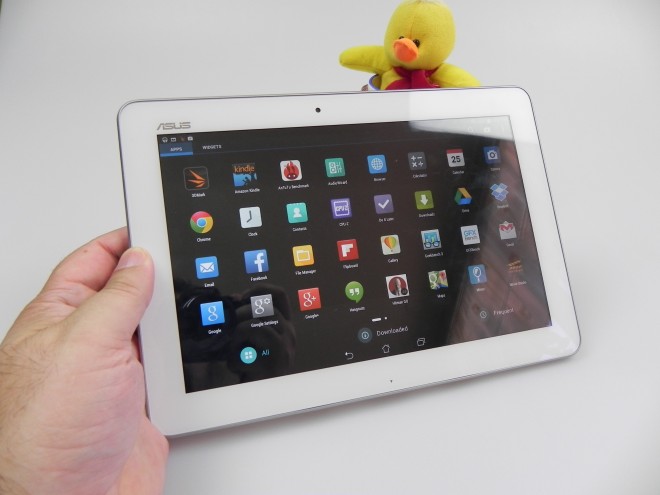 The CPU here is an Intel Atom Z3745, a quad core 1.86 GHz unit, a 64 bit Bay Trail actually. ASUS Transformer Pad TF103C comes with 1 GB of RAM, 16 or 8 GB of storage, 5 GB of ASUS WebStorage and a 2 megapixel back camera, or 0.3 megapixel front shooter. On the connectivity side there’s WiFi a/b/g/n, Bluetooth 4.0, Miracast and the specs list ends with microSD (up to 64 GB extra storage), G sensor, e compass and GPS.

The battery is a 19 Wh unit, a Li Polymer power source, that on paper should provide about 9.5 hours of functioning. In our usual video playback loop test, with WiFi on and brightness at 50% we achieved 5 hours and 20 minutes, which is a tad disappointing. The charging is also quite long, at 4 hours. In the Settings area, you’ll find the Power Saver option, that includes 3 sub options: Ultra Save, that disconnects the network when the screen is off, Extend and Keep connection On and Customize, that lets you choose the brightness level for a variety of tasks/apps. 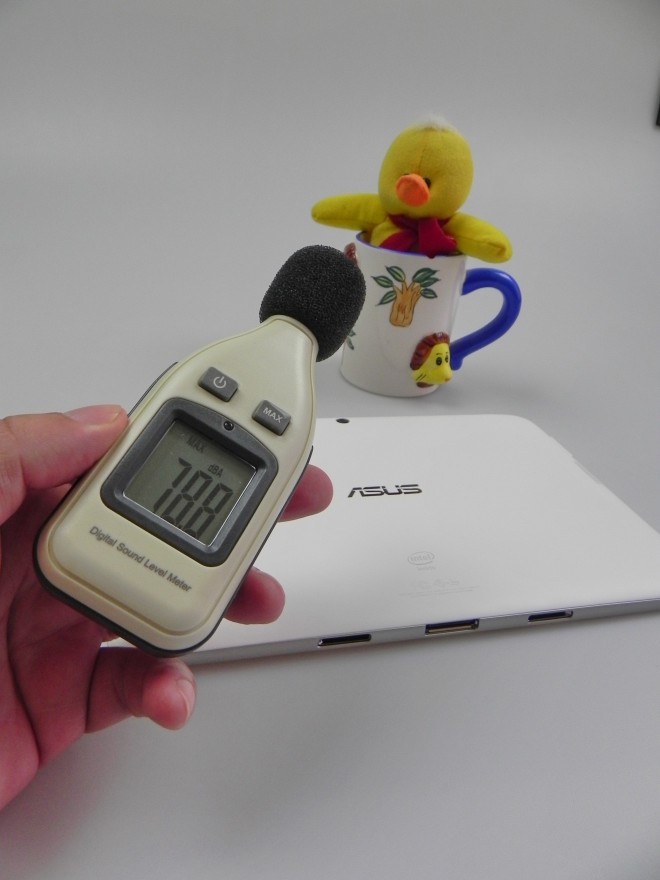 On the audio side we’ve got stereo speakers and the music app adopts a simple UI and keeps the stock equalizer from Android. You can listen to the speakers easily even when the tablet lays on a flat surface. The speakers are loud, the bass is good, the sound is clear and it’s all crisp. As usual, I expect Bang & Olufsen to be involved here, since they work with ASUS usually on such devices. Audio Wizard is once again present, with 6 options: Power Save, Music, Movie, Recording, Gaming and Speech. Each of them offers a varied level of acoustics, depending on the action you’re performing.

We tested the speakers with a decibel meter and achieved 78.8 decibels, which is 6 less than the Galaxy Note Pro 12.2, that’s an expensive flagship tablet, so it’s a compliment for the ASUS model. The audio is very good and we move on to the display, that’s an IPS 1280 x 800 pixel unit, with a 10.1 inch diagonal. On paper it offers a 400 nits brightness and 170 degree viewing angles, while during video playback, you’ll get vivid colors, wide view angles and a bright and crisp experience.

The colors are natural and we’ve got RGB stripe pixels here. We used a lux meter and achieved 391 LUX units on white, which is very good for this price. There are also special settings for this display, like the Reading mode, that turns the screen beige and yellow to better suit your eyes for image viewing and text reading. There’s also ASUS Splendid, a specialized app, used for tweaking color temperature (warm/cold), hue, saturation and overall this is an excellent screen.

The camera is a 2 MP unit, that has too good software for its hardware. It has too many cool options that are wasted on this lowly sensor. There’s a new UI here and bits and pieces of the Pixelmaster technology. We’ve got effects, white balance, ISO up to 800, exposure, optimization and picture taking with resolution up to 1600 x 1200 pixels (4:3). There’s anti shake, self timer, burst, face detection and HD filming, with an option for stabilization. The Modes include Auto, Time Rewind (take pictures 2 seconds before pressing the shutter button and 1 second after, with a total of 31 pics taken), HDR, Panorama, Night, Selfie, Miniature (blurs certain areas), Smart Remove, Allsmiles and Beautification. 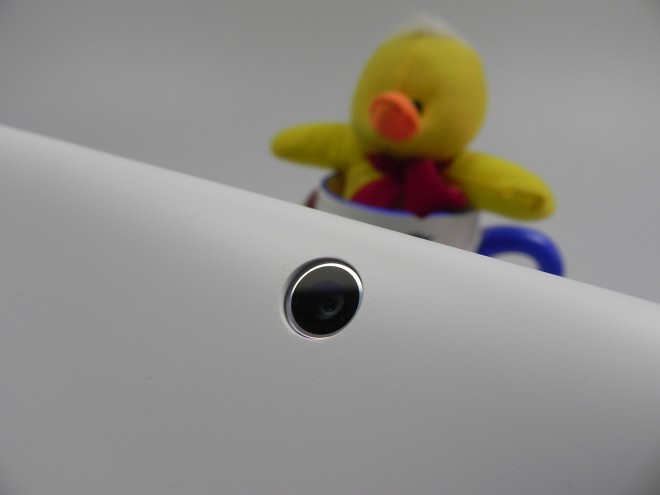 The pictures look decent and when you’re done taking them there are also some editing features, like filters, frames, crop, rotate, exposure, vignette and the likes. Now that we’re done with the camera, we move to performance. The device achieved a temperature of 34.5 degrees Celsius, which means we don’t get overheating. The Browser is fast and also offers us the chance to check out the virtual keyboard, that includes a numeric row and it’s very ergonomic. 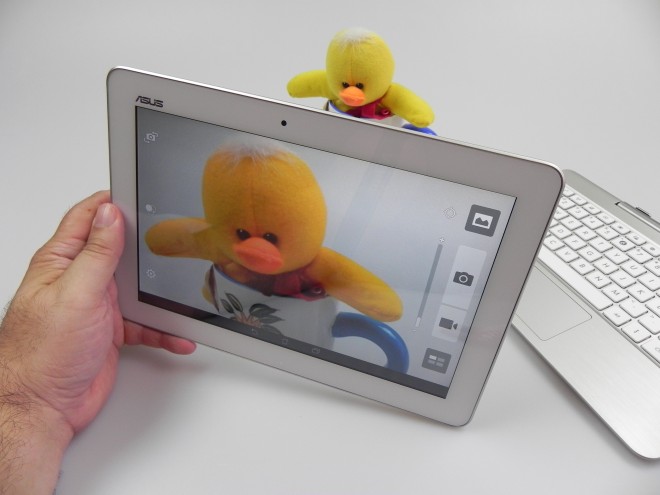 BrowserMark 2.1 didn’t work on the tablet’s browser, but then again it’s a new version of the benchmark, with many problems. In GFXBench the slate registered 14.8 FPS in the main test, while an iPad air gets 27 FPS in the offscreen one. In GeekBench 3 we got 769/2344 points in the single core/multi core test, while the iPad Air gets 1481 and 2697 respectively. Finally, the ASUS Transformer Pad TF301C gets 602 points in Sunspider and 21 Mbps download speed in Speedtest, as well as 20 Mbps in Upload. The benchmarks are admirable for this price.

The OS here is Android 4.4.2, with Zen UI on top and we’ve got a flat interface, new colors and fonts, as well as icons. Everything is less glossy, transitions are more fluid and there are also brand new widgets. The layout is more clear and the lockscreen shortcuts include camera, email and web. We’ve got weather and alarm, as well as a new concept called What’s Next. That’s shown as a timeline on your lockscreen, with the weather, reminders and appointments you have in your calendar. 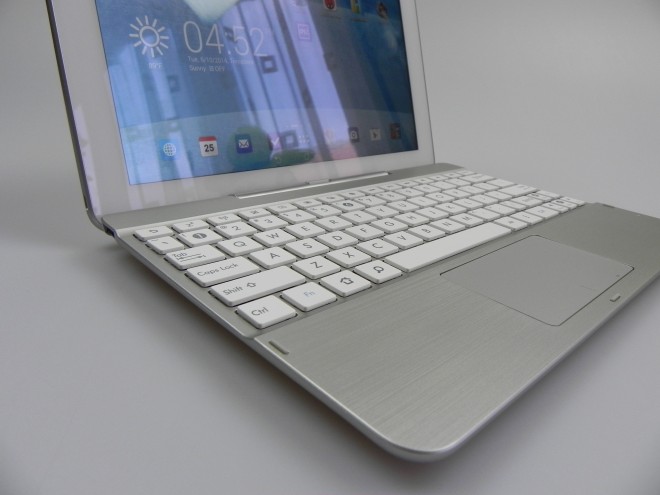 It also has its own app, with the scheduled that includes birthdays, Facebook events and such, as well as the weather. The other concept is Do It Later, another new app, that includes tasks from various accounts, phones, emails, messaging and browser. The notification area is minimalistic and has a slight HTC Sense vibe to it, which is a compliment by the way. Other things worth mentioning are the 11 GB of space you get on the 16 GB model, the power saving location settings and the useful shortcuts on the keyboard dock. We’ve got buttons for sleep, WiFi, brightness, screenshot, settings, media playback and mute, plus volume and that last extra button that’s mysterious is a touchpad on/off button.

We give the ASUS Transformer Pad TF103C an 8.5 out of 10 for design, a 9.1 out of 10 for hardware and a 9.8 out of 10 for OS and UI. The final grade is 9.13 out of 10 and this is a tablet with bundled dock and a very good price, a 64 bit slate with excellent multimedia features and powerful hardware, but one that sacrifices the battery a bit.

Sony Xperia Z4 Tablet is so Light It Can be Carried...