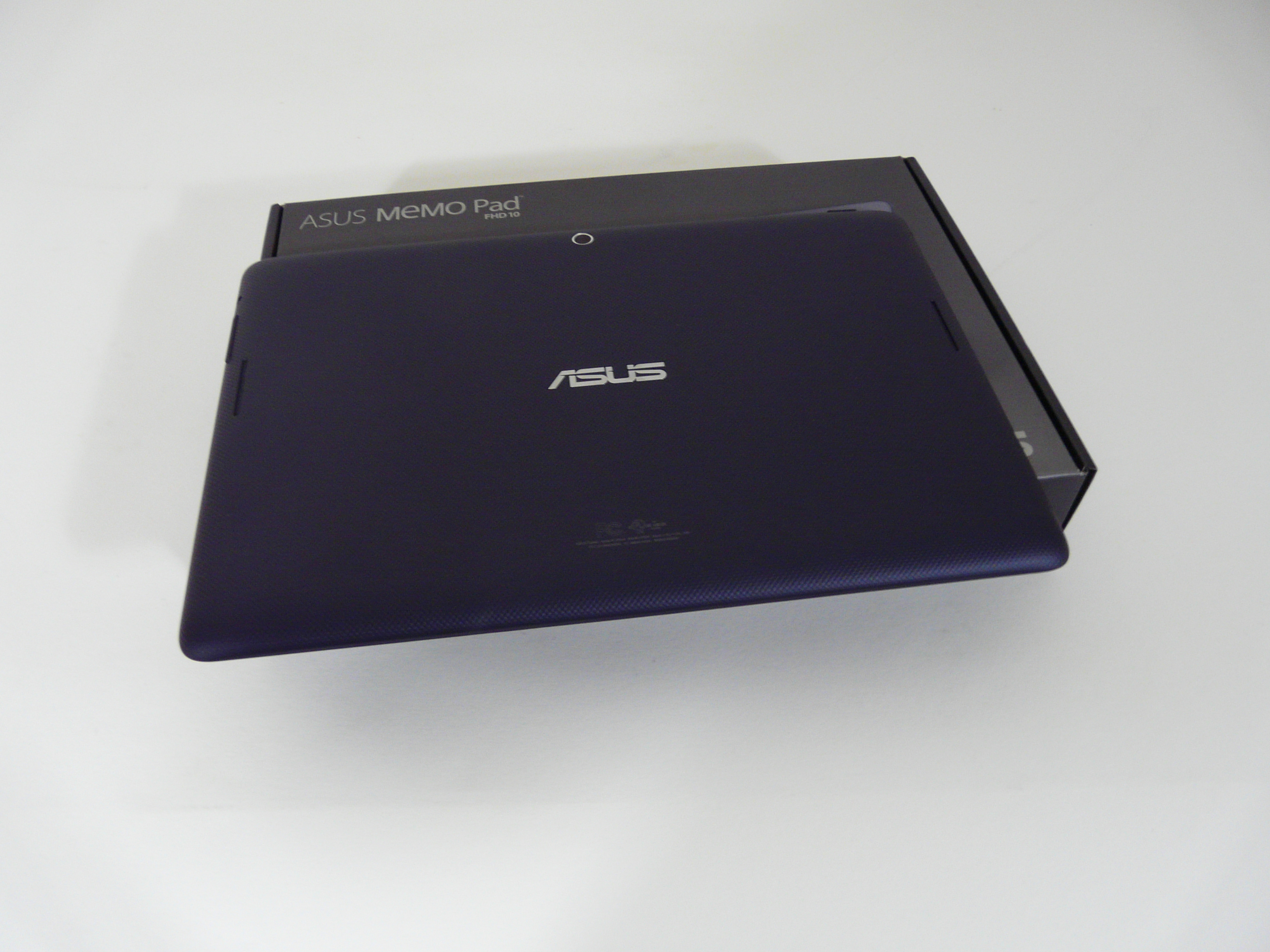 The ASUS MeMo Pad FHD 10 tablet has been introduced at Computex 2013, early last month and now it has come to us for testing. The product will hit the stores in August and the price tag should be below $500 for the 32 GB version. We are also testing the ASUS MeMo Pad HD 7 tablet, that will be reviewed next week. 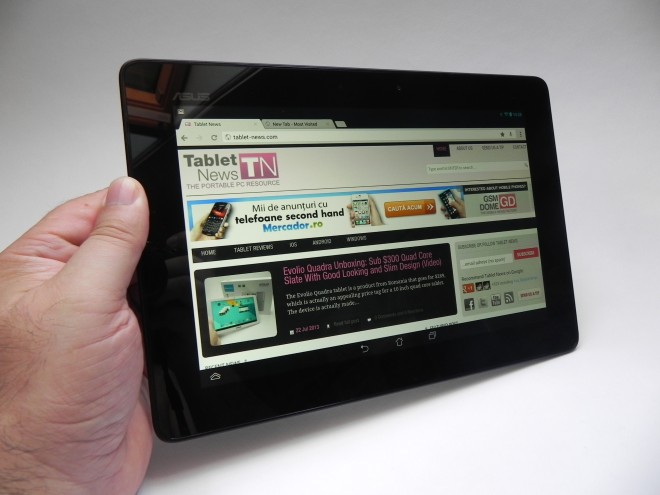 The MeMo Pad FHD 10 tablet offers good grip and a 3D Microweave pattern at the back. This is 9.5 mm thick device, that weighs 580 grams, so it’s a very light and thin unit. The tablet has volume buttons, a microSD card slot, micro HDMI port and micro USB to the side and there’s an On/Off button at the top.

We’ve got dual speakers at the back, a shiny ASUS logo also at the back and my only objection concerning the design would have to be the big bezels. This slate is comfortable to hold and use, it’s highly portable and it will come in white, blue or pink. As far as hardware goes, we’ve got an Intel Atom Z2560 dual core 1.6 GHz processor inside, a Clover Trail+ unit with hyper threading technology. On the graphics side we’ve got a SGX544MP2 GPU at 400 MHz and other specs include 2 GB of RAM, 16/32 GB of storage, a microSD card slot (32 GB max) and a 10.1 inch display. 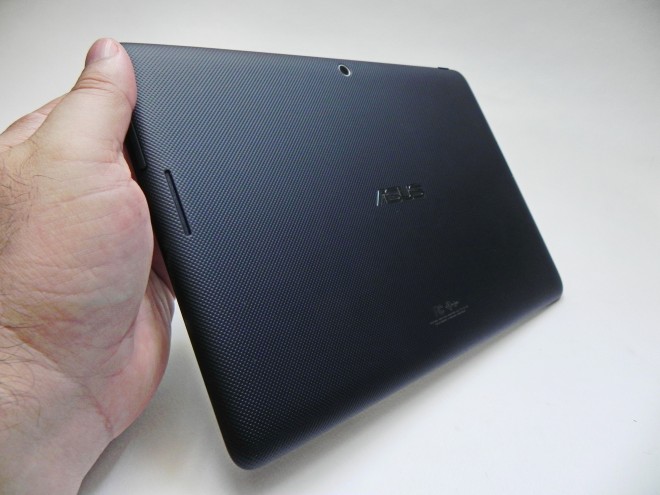 Hardware specs of this device include a G Sensor, gyroscope, e compass, ambient light sensor and a 6760 mAh battery. The latter charges in 3 and a half hours and offers 10 hours of functioning time on paper. In our tests, the device achieved 10 hours of HD video playback on YouTube, with WiFi on and 50% brightness. You can also achieve 5 hours of straight gaming, if you want, so the battery is very good. 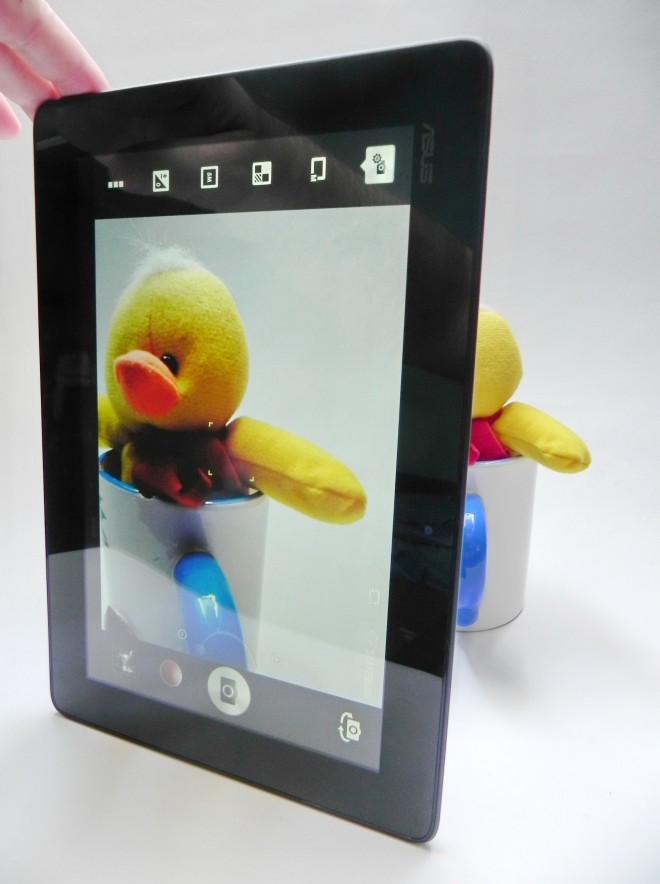 You’ve also got Smart Saving features, that will turn off the connectivity when you’re in standby mode and there’s GPS, Glonass and stereo speakers as well. Moving to the audio side, ASUS provides here the SonicMaster technology, while Bang & Olufsen also contributed with their expertise. The result is a balanced dynamic range and thanks to resonance testing they got rid of vibration. ASUS MeMo Pad FHD 10 offers high quality audio, loud volume, but still not close to Nexus 10 and a very good bass.

There’s no distorsion and we’ve got Audio Wizard to tune up the experience. The various modes of Audio Wizard will optimize your experience for gaming, movie viewing or music, for a more natural sound. On the video side, there’s a full HD IPS LCD screen here, with natural colors, good view angles and OK brightness, although frankly speaking you can’t really feel the jump from 50% to 100% in brightness. 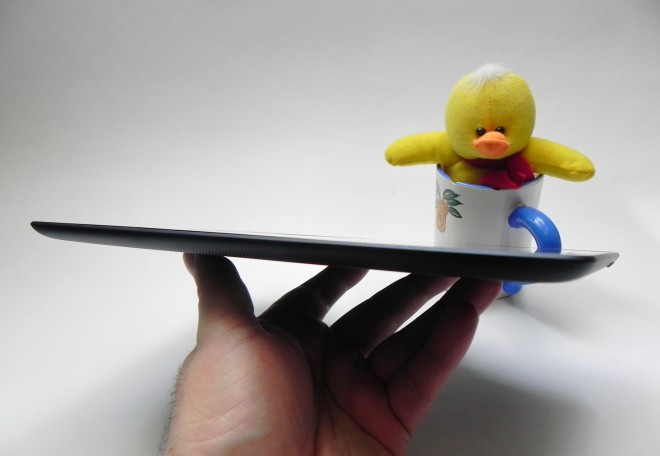 There’s also no Outdoor mode, like on other ASUS tablets, but you can customize your color saturation, temperature and how vivid the image is with the ASUS Splendid app. Overall the screen is very good and moving to the camera, this 5 MP sensor comes bundled with an impressive number of options. There’s Panorama, a lot of scenes, effects, ISO, white balance, anti flicker, time lapse and many more options. The video capture is done in 25 FPS and Full HD and picture taking and focus are reasonably fast.

Sadly, while the tablet focus you can’t access the camera options. There’s also a slight photo edit aspect, offered with every picture you access. This slate runs Android 4.2.2, it has a fast browser, confirmed by the BrowserMark 2.0 benchmark result, 2561 points. I like the keyboard and its numeric row at the top and I also like the fact that unlike the Nexus 10, this model has a single notification dropdown area, with toggles included. The Nexus 10 had two dropdown areas. 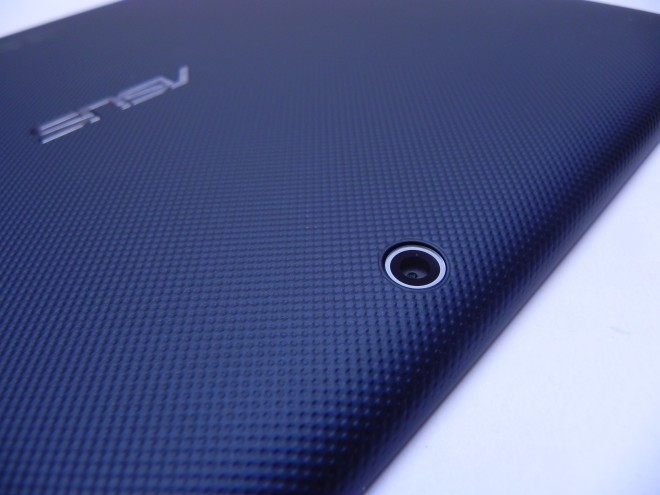 ASUS also implemented floating apps, which is basically yet another multitasking system, that involves mini apps floating on the screen, that can be used at the same time. Those include a calculator, a video player, calendar and note taking app, among others. Moving further to the benchmarks, we decided to compare the ASUS MeMo Pad FHD 10 to the Transformer Prime and the Nexus 10. This is a battle of a dual core Intel CPU with a dual core Exynos CPU and a Tegra 3 quad core CPU. The FHD 10 gets 5603 points in Quadrant, beating the Transformer Prime and its 4300 points and the 4614 points of the Nexus 10. 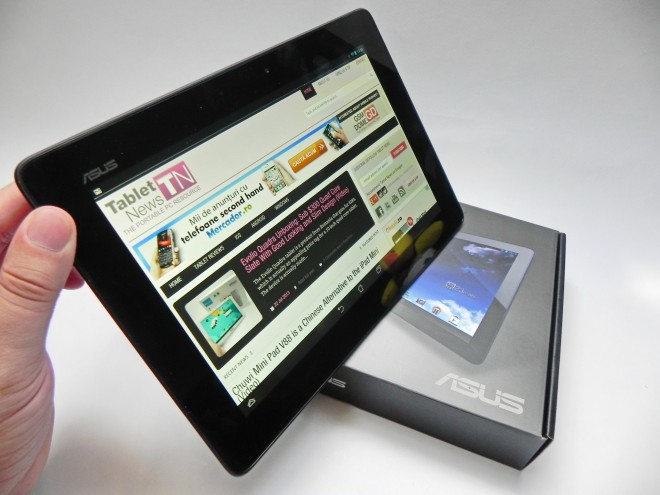 ASUS also bundled some of its own apps here, like the App Backup, App Locker, ASUS Artist for drawing, ASUS Story for creating photo albums with text, location and more (collages) and ASUS Studio, which is basically a gallery app. There’s also ASUS To Do, a memento app and Parental Lock for the kids. The usual ASUS Web Storage is here, accompanied by SuperNote Lite.

And now it’s time for the verdict, first with the Pros of the tablet:

Apple Doesn’t Have What it Takes to Ban the Samsung Galaxy...