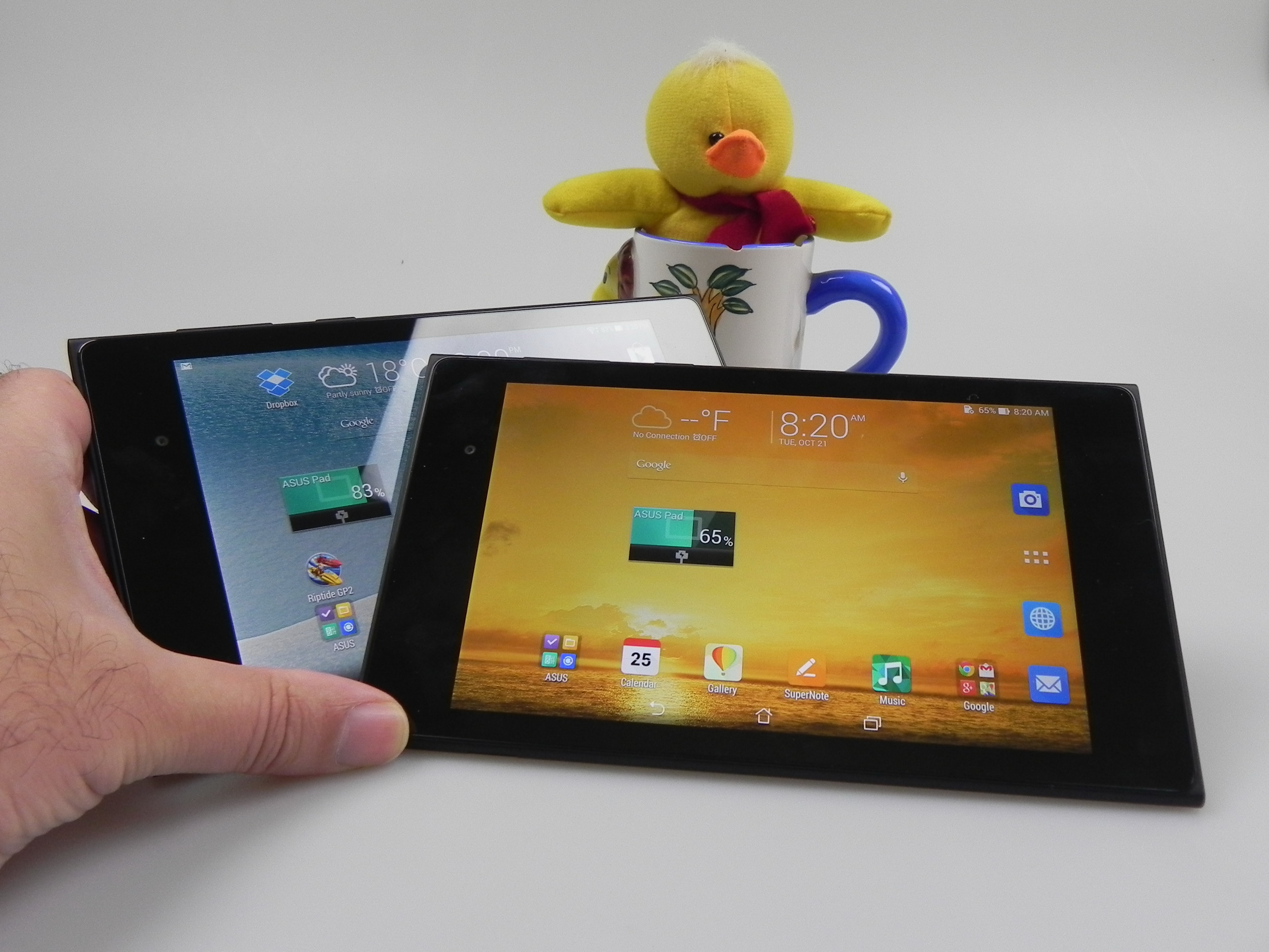 The ASUS MeMo Pad 7 ME572C is an elegant follow-up to the MeMo Pad HD 7, that was unveiled at IFA 2014 in September and it also comes in the ME572CL flavour, with LTE. We actually got the chance to play with both models and we liked them a lot. The price tag for the WiFi 16 GB model is around $280, which is very good for such powerful specs. 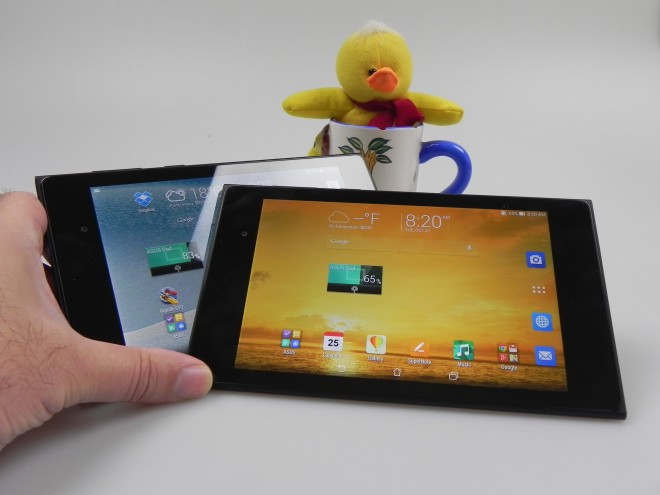 The design of the device is inspired by clutch bags for women, as ASUS claims and it’s minimalistic, plus at the back area it feels like a discretely folded magazine. Overall, the slate gives the impression of a new Nexus tablet, which is a compliment. It’s got good grip and it’s even comfy to hold with a single hand while reading a book or playing Temple Run. The product comes in red, black or champagne rose and it has a dotted back, plus a Nokia Lumia-style format, only bigger.

It measures 8.3 mm in thickness, weighs 269 grams and has rounded edges. The ME572C is made of plastic, but still solid and it’s also long and narrow. Upfront we’ve got very big bezels, especially at the top and bottom, but they’re meant to hold the device better in landscape mode. Also upfront there’s the front camera, some sensors and a glass cover extending from one side to the other. At the back we’ve got the main camera and logo, while at the top there’s the audio jack and speaker.

The bottom only holds the other speaker and microUSB port, while the left hosts the microSD card slot. On the right side there’s the volume buttons and On/Off button, with good feedback and a mystery hole below the On/Off. In spite of the very big bezels, the ASUS MeMo Pad 7 ME572C is a very elegant piece of work. Moving on to the specs, the tablet packs a 7 inch IPS display with 10 finger multitouch, as well as 1920 x 1200 pixel resolution and an anti fingerprint coating.

Inside we’ve got the Intel Atom Z3560 quad core 64 bit processor, clocked at 1.83 GHz, as well as 2 GB of RAM, 16/32 GB of storage and 5 GB of ASUS WebStorage in the cloud for a life time. The GPU is a PowerVR Series 6 G6430, while the microSD slot offers support for up to 64 GB extra storage. At the back we’ve got a 5 megapixel camera, while upfront there’s a 2 MP shooter. On the connectivity side, the tablet offers WiFi 802.11 b/g/n, Bluetooth 4.0, Miracast, GPS and Glonass. There are also stereo speakers included, a G Sensor, light sensor and an electronic compass. The battery is a 15 Whr Li-Po unit, good enough for 11 hours of usage on paper. 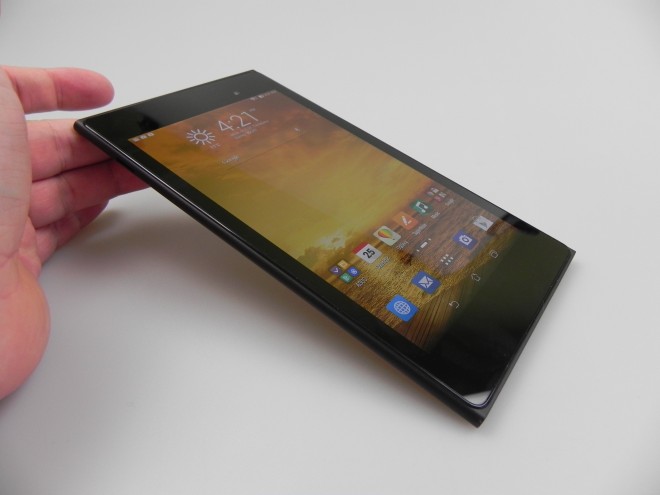 During our test, that involves HD video playback with WiFi on and brightness at 50% we achieved 10 hours and 14 minutes of HD video playback. Meanwhile, the Nexus 7 2013 only gets 7 hours and the LG G Pad 8.3 only 7 hours and 40 minutes. The battery life is about the same as the one of the ASUS MeMo Pad HD 7 and a bit past the 10 hours of the Xiaomi Mi Pad. The charging takes kind of long, 3 hours. In the Settings area we’ve got the Power Management, that includes both a Power Saver and a statistics database, showing which apps drain the battery most.

The Power Saving modes include 3 options: Ultra Saving Mode, that disconnects the network when in standby mode, the Optimized Mode, that keeps both connectivity and good battery usage and the Custom Mode. The latter allows you to tweak the brightness level associated to various activities, from email reading, book reading, to music, video and more. Overall, the battery is good and you should get about a day and a half of solid regular usage. 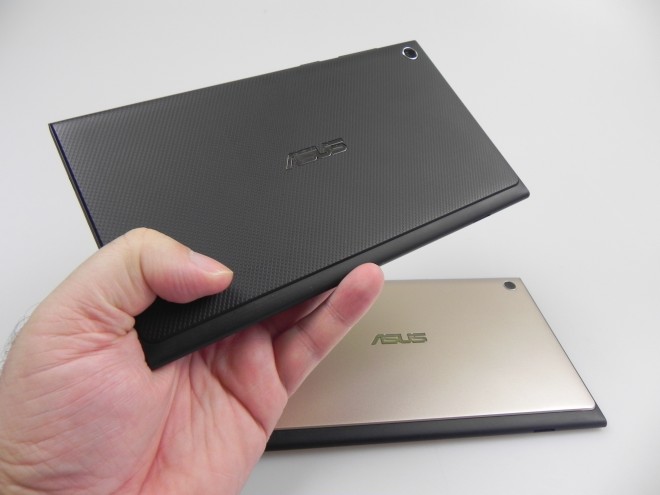 On the acoustics side, there’s the Sonic Master stereo speakers available and a minimalistic music app, fit to the Zen UI styling. The Settings include the stock Android EQ and the speakers offer a deep sound, good bass, loud experience and very good percution. They’re clear and surprisingly loud in games. ASUS also implemented the Audio Wizard thingie, with 6 presets, including Smart, Music, Movie, Recording, Gaming and Speech. Each of them allows you to chance the way the sound is delivered to the user, depending on the experience. Overall, acoustics are very good, beating the iPad Minis and the LG G Pad 8.3, but not the Nexus 7 2013, that had very good speakers. 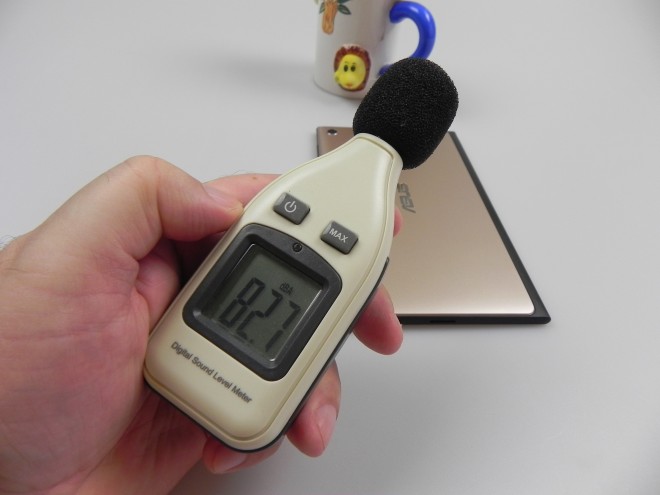 We achieved 82.7 dBA when using the decibelmeter at the back of the device and 81.8 dBA upfront. Meanwhile, the Xiaomi MiPad gets 84.2 dBA, so it’s a bit better. I’d say the audio is excellent for the price paid for this model. The display offered here is a 7 inch IPS LCD with LED backlight and a 1920 x 1200 pixel resolution. We’ve got 10 finger multitouch and we’re using the gallery as the video player. The viewing angles are great, the screen is bright, crisp and clear and the colors are both vivid and realistic. 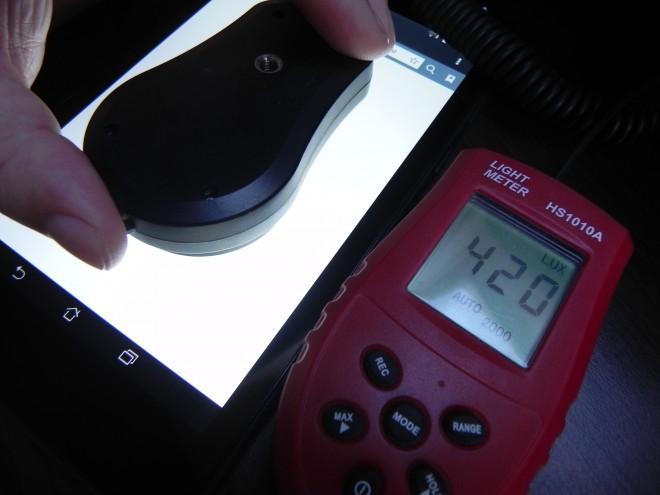 Contrast is OK and the screen of the new MeMo Pad 7 offers RGB Stripe pixels and a LUX level of 420 LUX on white. This means the screen is brighter than the one of the LG G Pad 8.3 with its 260 LUX, or than the ASUS MeMo Pad HD 7, with its 330 LUX, or the Xiaomi Mi Pad, with its 310 LUX. We did get beaten by another ASUS model, the Nexus 7 2013, with its 508 LUX. The settings area for the screen include features like font, brightness, reading mode (image and text or text only), with the latter taking down the synthetic screen white a bit and replacing it with beige or yellow.

Then there’s the ASUS Splendid app, that customizes the temperature of the screen, including a Vivid mode and also involves a temperature slider, that makes the screen colors cooler or warmer. There’s also the Enhancement section, with options to tweak hue and saturation. Overall this is a very good screen and we move on to the camera. We’ve got a 5 MP back camera, a front 2 MP shooter and the former has autofocus and Full HD video capture. 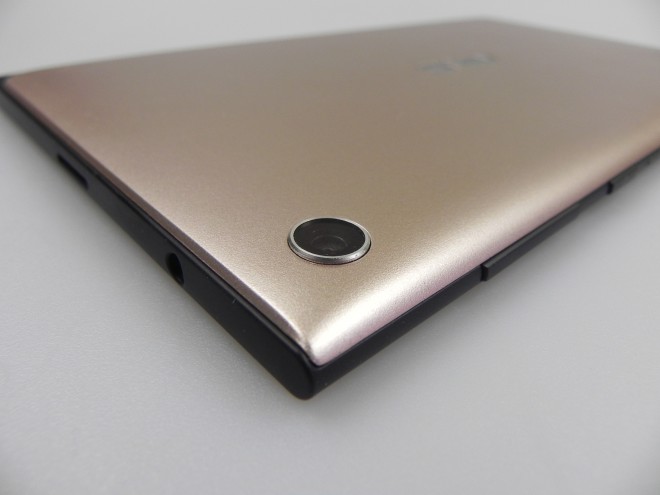 The UI is minimalistic and features a front camera shortcut on the left, effects in the same area and Settings. Those include white balance, ISO up to 800, exposure, optimization, resolution (2560 x 1920 in 4:3 or 2560 x 1440 in 16:9). We’ve got anti shake and the image quality can be set to fine or standard. There are also options like touch shutter, self time, burst, focus modes (smart AF, continuous AF or infinity focus), plus touch auto exposure, face detection and even some video options, like white balance, exposure, resolution, stabilization. Finally, there’s smart brightness and guidelines, anti flicker, location, sounds and volume key functions. On the right side of the camera UI you’ll find the gallery shortcut, shutter button, turbo burst button and video capture button.

Below there are the Modes that are familiar if you’ve seen our latest FonePad review. Those include Auto, Time Rewind, HDR, Panorama, Selfie, Beautification, Miniature, Depth of Field, Smart Remove, All Smiles and GIF in the Photo area, while the Video area includes Auto, Miniature and Time Lapse. There’s also an option called Party Link, that lets you connect to the nearby devices to share pics. 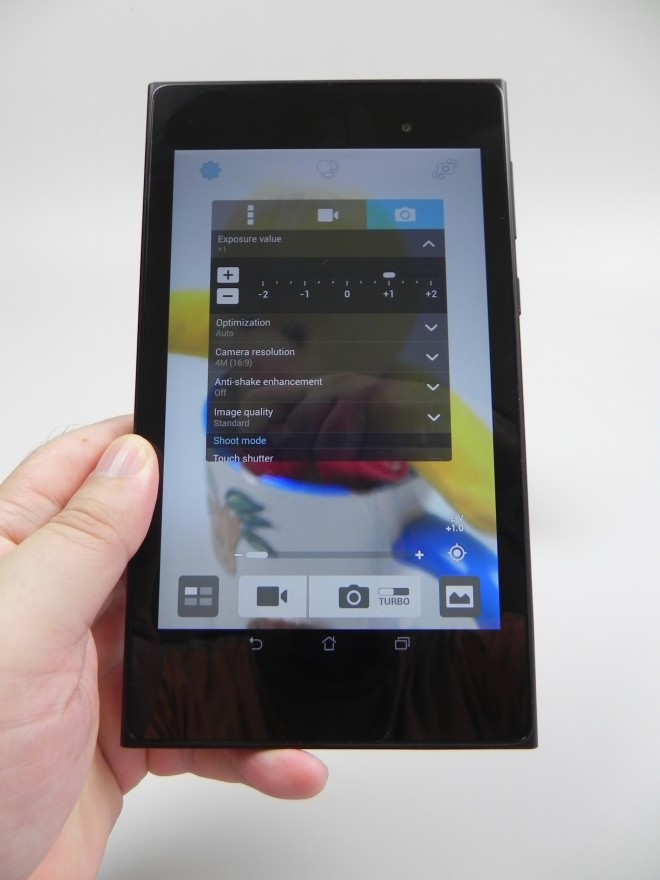 Picture taking is not very fast here and neither is the focus. The resulting shots are noisy and unimpressive, below the quality of the Nexus 7 2013, sadly. However, this is still a sub $300 device, so the quality of a 5 MP camera is OK. You can also edit pics with options related to people’s faces, filters, frames, crop, exposure, shadows and more. Moving on to software and performance, the ASUS MeMo Pad ME572C reached 38.8 degrees Celsius after 15 minutes of playing Riptide GP2, so there’s no overheating here.
The web browser on the device is fast and we’ve got a comfy keyboard in the mix as well. The OS here is Android 4.4.2 with Zen UI on top, in a flat and minimalistic appearance, much like the latest LG UI and HTC Sense 6.0.

And now let’s check out the benchmarks:

You should also know that this tablet beats the Xiaomi MiPad in AnTuTu, by about 1000 points and the iPad Mini Retina in 3DMark by 4000 points. It also beats all the other models from the table above, so it’s a well performing unit. It runs lag free and it’s able to move Riptide GP2 without lag or flaws. The benchmarks results are also pretty similar to the recently tested ASUS FonePad 7 FE375CG. The UI available here is simple and familiar from previous ASUS devices and it brings the usual multitasking based on swiping movement to the side, the dropdown area with notifications and quick settings, including a Boost feature, connectivity options and dictionary.

The Settings area includes ASUS Customized Settings, that associates the screenshot feature to the recents virtual button. Widgets are also unique to this UI and they’ve very minimalistic some of them being simply white symbols on a transparent background. The lockscreen shows a variety of info, including a camera, email and browser shortcut, the weather and a What’s Next widget. By the way, What’s Next and Do It Later are two of the main pillars of innovation in Zen UI. 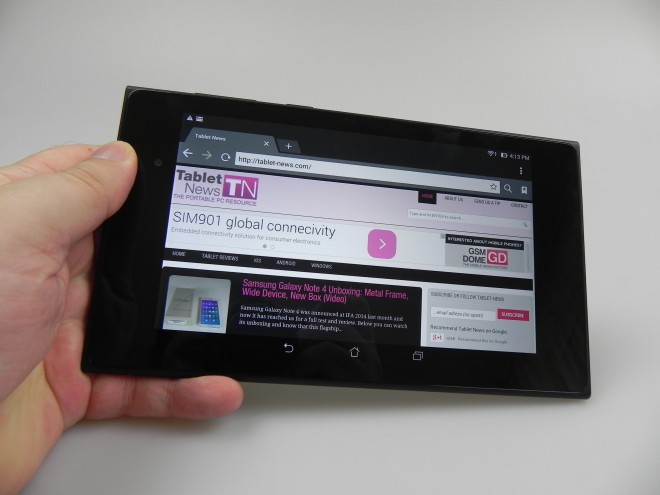 The first offers a vertical timeline of the birthdays, events you’re about to attend over the next days, weather and other such tasks, without distractions. The Do It Later is a constantly open list, that is associated to all the core apps and supports adding calls, mails, texts, memos and web pages that you’ll read in just hours or minutes. This is sort of a more immediate to do list. And now let’s see the preinstalled apps list, that’s kind of filled with bloatware, sadly.

Chuwi Hi9 is Probably the Best 8 inch Gaming Tablet You...