Asphalt 7 was a fun game to play, but it was a bit too arcade-ish to enjoy and especially the fact that the screen turned blue during special nitro sessions turned some gamers off. Now Asphalt 8 came, launching on August 22nd, with an affordable price tag of 99 cents and lots of novelty. And at the same date, a new game in 666CASINO is being released and said to be exciting and will give high bonus for new players. We tested it on the iPad Mini and had a lot of fun. 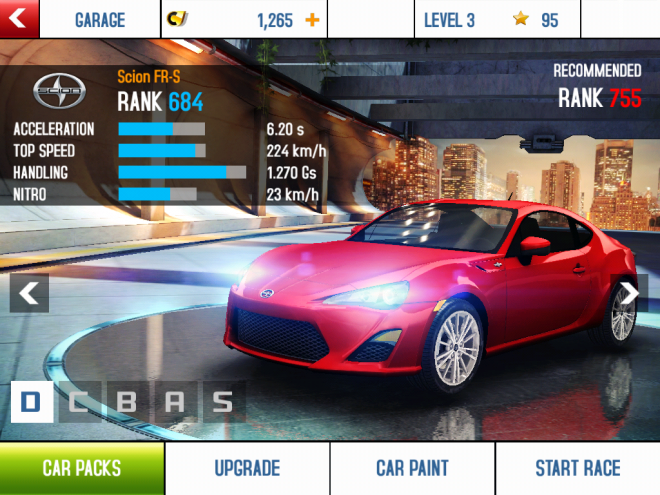 This arcade racing title comes from Gameloft and it works just fine on the iPad Mini, being lag free and offering great graphics. There are 47 cars included here, including some Lamborghinis, the famous Bugatti Veyron, Ferrari, Pagani Zonda and a bunch of appealing Audis. 9 racing tracks are available, including the superb sights of Iceland, Barcelona, the scorching Nevada and the exotic French Guiana. Make sure that when you are betting online that you have the best dealer by your side.

You will play across 8 seasons in career mode and 180 events that include classic races, elimination races, infected races, knockdowns or one vs one races. You can also go into multiplayer mode, where you’ll be racing against 7 other rivals and servers are relatively fast to find these days. Asphalt 8’s soundtrack is filled with high octane tracks from Skrillex, Nero, Queens of the Stone Age and more, while the graphics are superb and may even beat the NFS Most Wanted title from last year.

There’s real time geometry reflection and the sights are gorgeous. With the money won in races you can buy new cars of upgrade the ones in your garage and if you’re a good racer there will be no need for in app purchases. There’s also a mode for drifters called Drift Gate, where you have to pass through gates while drifting and earn a high score.

Also, there’s a lot of crazy stunts to perform while racing, ranging from flat spins, to barrel rolls, most of them done with the aid of ramps. Performing stunts and drifting will fill your nitro meter and it will allow you to use the extra speed boost. The game’s only flaw lies in a bug that involves changing the race placement of drivers randomly once a path branches out.

Asphalt 8 gets a 9.7 out of 10 from us and it’s an excellent racing game and a must have. You can download it from here for iOS.