Most corporate environments would theoretically go with Windows tablets, but since everyone has an iPad nowadays, they are finding solutions for that area. Thus, the iPad is dominating the enterprise tablet market, but Android and Microsoft Surface are ready to steal away some of that market. 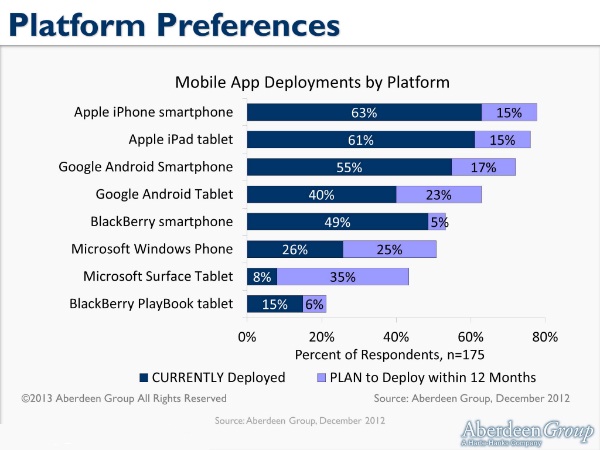 Over the last two months of 2012 market research firm Aberdeen Group asked 348 organizations about their plans concerning tablets. The results are shown in the table above, with the iPad being at the top, with 61% of respondents opting for it and deploying apps to this platform. 15% more plan to do so by the year end.

It’s important to note that the rate of growth of the iPad is slowing, because most companies have already adopted it and there’s no new terrain to conquer. However, Apple’s lack of innovation over the last few iOS releases may make companies look into Android or Windows options. Android is placed second right now, with 40% of organizations deploying Android software and 24% intending to do so over the next 12 months.

Microsoft’s Surface only takes up 8% of this study and an extra 35% intend to make use of the slate by the end of the year. The BlackBerry PlayBook also got a decent 15% of companies deploying apps for it.