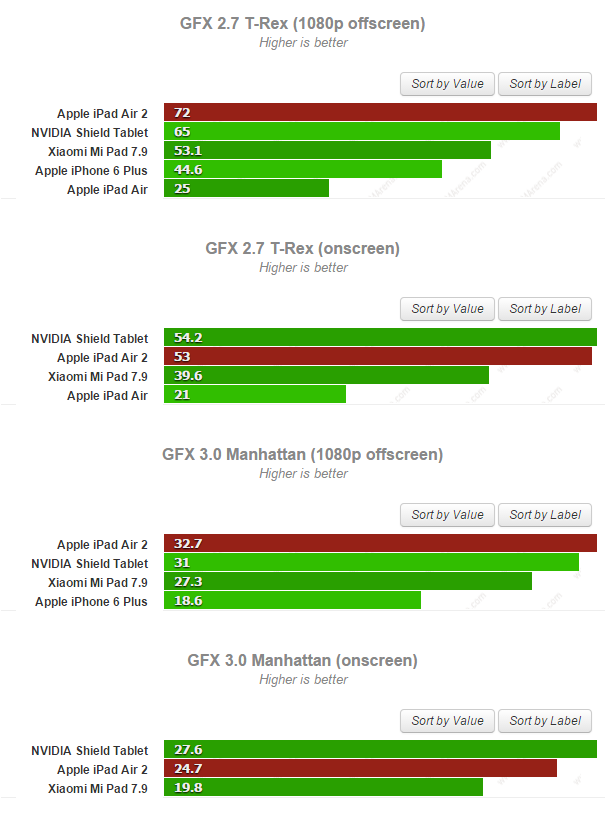 The iPad Air 2 has been put to the test yet again, this time in GFXBench, in order to find out the strength of its GPU. The device has been passed through both the T-Rex and Manhattan onscreen and offscreen tests and behaved admirably.

The results proved that the latest iPad Air is as good as the Tegra K1-based devices and sometimes even better. The Apple A8X GPU beats the one of the Tegra K1 in both offscreen tests, the one that have a cap at 1080p and show the raw power of the GPU. The onscreen tests have less of a framerate to offer, especially because the iPad Air 2 surpasses the Full HD resolution.

Still, the slate was ahead of the Xiaomi Mi Pad, that has the same resolution and the Nvidia Tegra K1 inside. Keep in mind that the Nvidia Shield Tablet was also beaten, but not by such a huge margin. What’s also impressive is that the iPad Air 2 scored more than the iPhone 6 Plus in these tests and that model was already considered very strong. Also, check out the difference between iPad Air 1 and Air 2 in the T Rex onscreen test: 53 versus 21. Quite the difference, right?

We have yet to see results of the 64 bit Tegra K1 and I’m guessing they’ll be higher than these ones.

New Apple Pencil Being Developed, According to Analyst