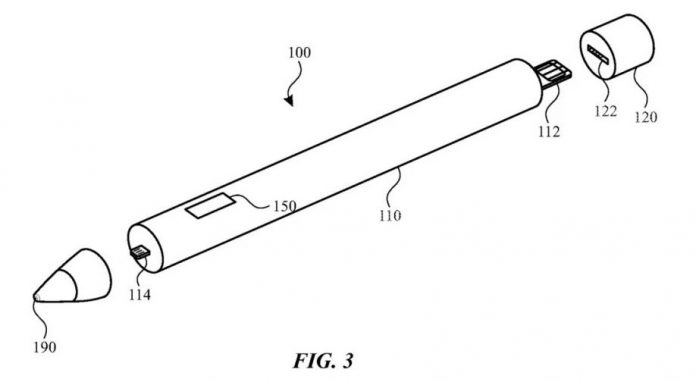 It’s been a while since we last covered a fresh Apple patent, but here we are, this time with some documents regarding Apple Pencil technology. I’ve said it before that the accessory is long overdue an upgrade and new tech. Apple has received a patent which alludes to a “multipurpose stylus with exchangeable modules”, covering tips or nibs for the Apple Pencil.

One would change the nibs on a Pencil for more precision during drawing for example or special interaction with editing and drawing apps. There’s also the idea of a nib that’s worn out and needs replacement. Apple explains in the document that the stylus offers interchangeability of various removable components, like a removable functional end module, covering a connector for charging and communicating with the stylus. Each removable component provides distinct features, letting the user select various capabilities for the functional end modules.

For the past few years people have gotten their hopes up regarding modularity and accessories for Apple’s devices. The MagSafe thing for iPhones is a good sign, but the constant leaks of cool high tech smart bands for the Apple Watches never come to life. We could also do with more modular cases for the iPads. Anyway, right now Apple offers two different generations of Apple Pencil accessories, compatible with certain iPad models. Interchangeable tips is actually a bad idea, business-wise, since consumers won’t buy a new stylus when the old one becomes obsolete or has the tip worn out.

One could also speculate that new tips may also mean that we’ll get iPhone interaction. Samsung already offers S-Pen input on the S21 Ultra and it would be a shame for Apple not to bring its stylus to its largest iPhones. Of course, a patent is just a patent and we may be reading too much into it.

New iPad Coming to 30 More Countries by the End of...