If you’re looking for your typical Shanzhai tablet, then you’re in luck, as we have a new model to show you today: the Aoson M19. This Asian slate comes with a 9.7 inch IPS screen, with a resolution of 1024 x 768 pixels and it runs on the RK 2918 chip with a Cortex A8 core.

The Menu, Home, Return and Power buttons can be found on the side of the tablet, that also comes with a GC800 GPU and runs 3D games smoothly. There’s also a 0.3MP front camera included here and a 2 megapixel rear facing cam as well. You can upgrade the Android here to ICS, if you want and know that the tablet has a standard and mini USB, HDMI and a SIM card slot. The product is available in WiFi and 3G versions, apparently. I’ve mentioned the CPU above, but what I didn’t mention was the frequency that’s 1.2 GHz, according to the official fact sheet.

The device can be upgraded to Android 4.0 and you’ll find no buttons on the front side, as shown by these pics. This model’s design reminds me a bit of a Romanian tablet called the Evolio Neura 3G, but only a bit. Those dual channel speakers at the back are actually a nice idea. 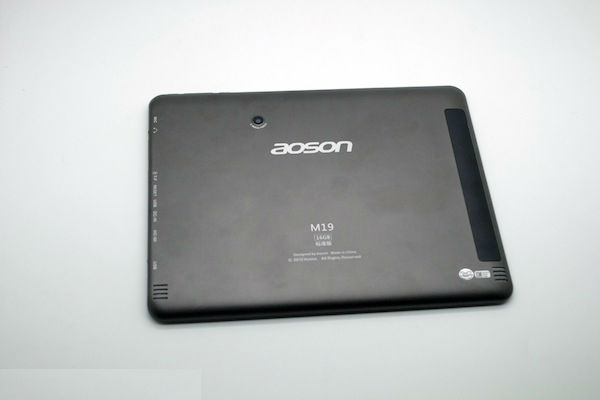