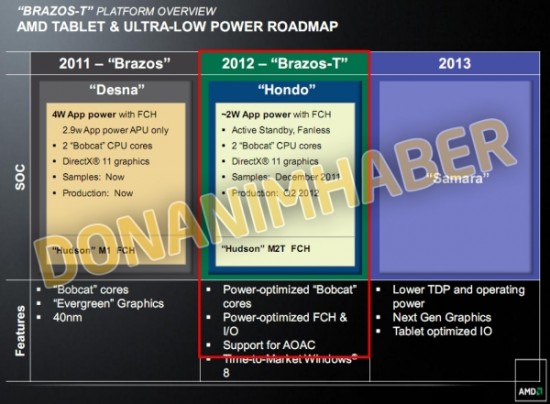 AMD is slowly but surely taking off in the tablet segment, that it graced recently with the Desna Z chip, but only a slate model or so. Now, thanks to a leaked roadmap, we know what to expect from this company: next-gen Fusion chips that will hit tablets in 2012 and 2013, according to a Turkish blog.

In 2013 we’ll see an AMD chip called Samara, but aside from next gen graphics and tablet optimization, we have no info on the product. In 2012, we’ll see the AMD Hondo chip, that will come with a TDP of under 4.5W and this low power comes from lowered I/O support, dropped PCIe, dropped VGA out and halved UMI interfaces. Also a single USB port will give you more battery life.

Right now we have the Desna AMD Z-01 chip and some low end Fusion chipsets branded Brazos, ready to capture a part of the market, till Hondo comes. In 2012 we’re expecting a configuration with 1GHz dual core Bobcats and 276MHz Radeon HD 6250 graphics. A cool feature supported is wireless playback of 720p video.

Expect samples to reach manufacturers in December this year and mass production to start in Q2 2012.

Copia Tablet is Very Cheap, Going for $99… Not That Appealing?