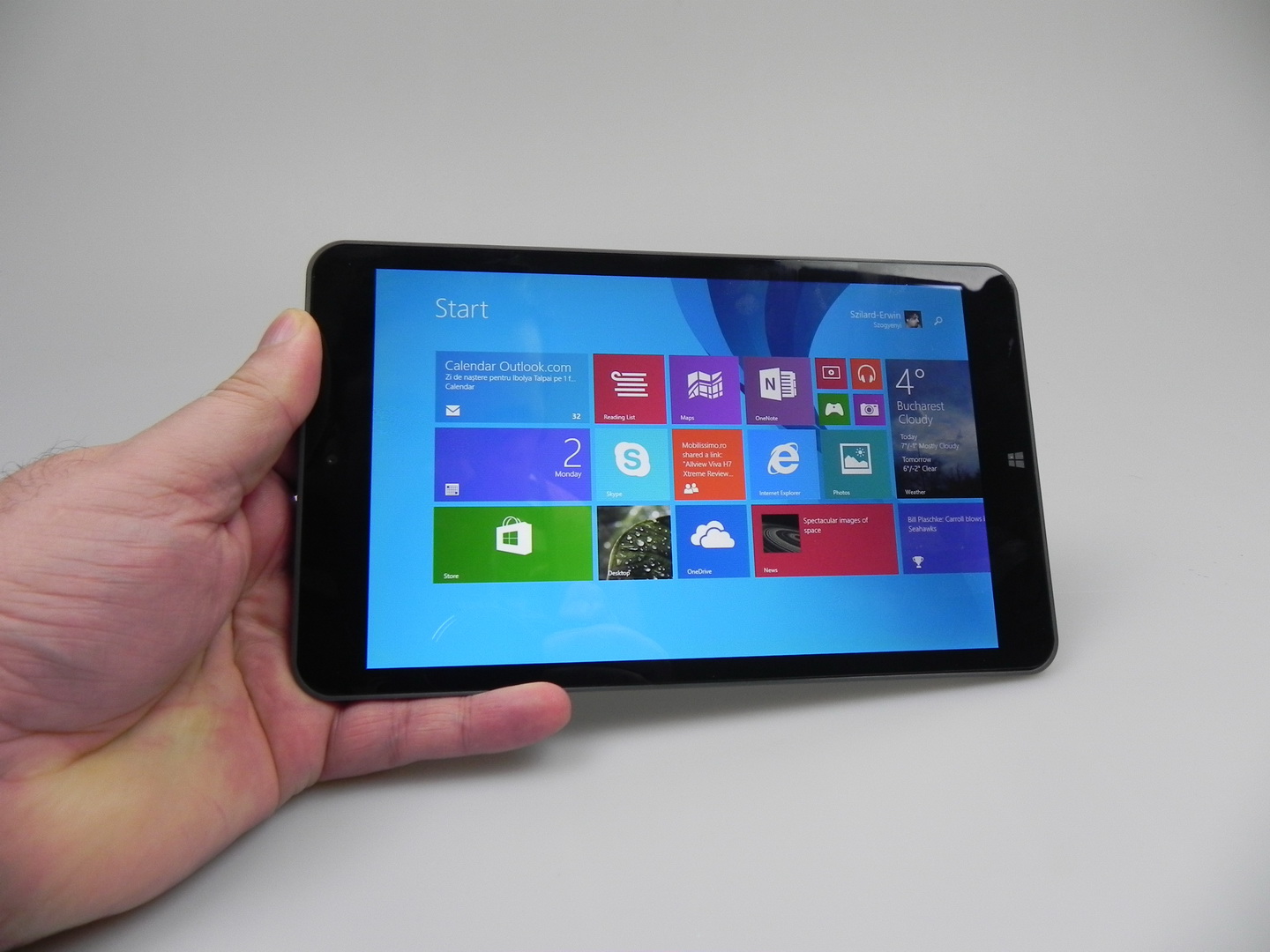 It’s not everyday that we get to test a Windows 8.1 tablet with an 8 inch screen, 3G connectivity and price below $200. Such is the case with the Allview Wi8G slate, a device coming from Romania, from the company Allview. This model is priced at $170 and it was announced in December 2014. Below you can check out its review. 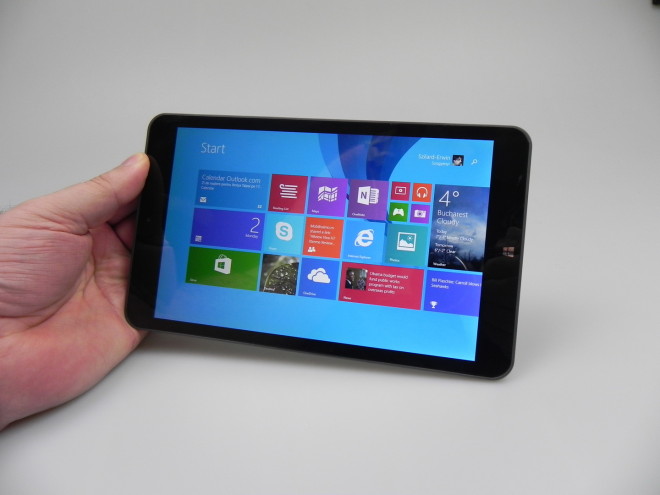 This is very the first Windows 8.1 Allview slate that we test, so it’s a bit of a premiere for us. It measures 9.07 mm in thickness and weighs 351 grams, while its basic material is plastic. The design reminds us of another older Allview slate, the Allview Impera i8. We’ve got rounded edges here and the front side is pretty much a fingerprint magnet. The device is slightly slippery and it looks OK for the price tag applied here.

It’s easy to move around the tiles with a single hand, while also holding the product, so that’s a plus. On the front side we find the front camera and Windows button, while at the back there’s the main camera and two speakers, as well as a lid at the top, covering up the microSD and SIM card slot. The lid is rather fragile and made from flimsy plastic. At the top we’ve got an audio jack and microUSB port, as well as microphone, while at the bottom there’s nothing. 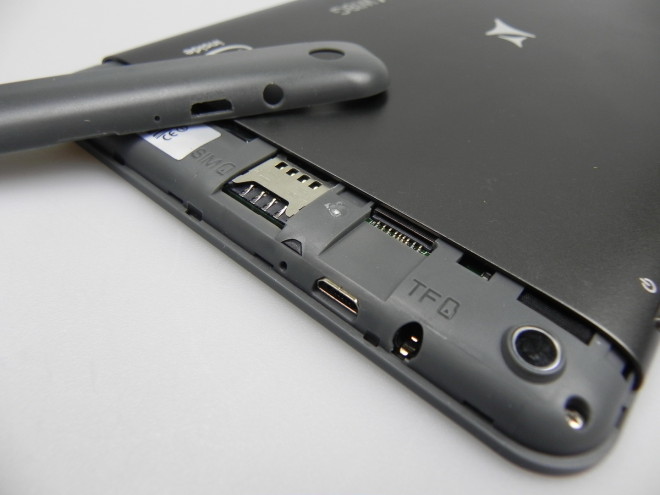 Allview Wi8G also features nothing on the left side and on the right there are the On/Off and volume buttons, with OK feedback. The tablet has big bezels and comes in black or white. It’s got a pretty solid case, in spite of the plastic usage and overall it’s pretty much OK, considering the price you pay. On the hardware side, there’s an IPS LCD 8 inch screen, with a 1280 x 800 pixel resolution and a 16:10 format, as well as an Intel Atom Z3735G quad core processor, clocked at 1.33 GHz, with 2M Cache and burst mode reaching up to 1.83 GHz in clock rate. 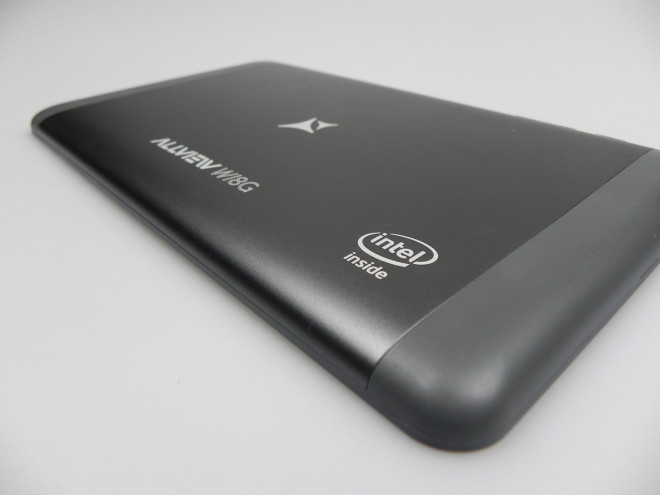 In the section we call others, there’s the accelerometer, while the battery is a Li-Po 3800 mAh unit (3.7 V) and the charger offers a 5V/2A setup. On paper, the battery provides 4 hours of use or 140 hours of standby functioning. In our test, that involves HD video playback in a loop, we achieved 7 hours and 20 minutes of HD video playback with WiFi on and brightness at 50%, which is not bad at all.

The charging takes place in 2 hours and a half. As far as battery Settings go, we’ve got some Sleep mode options in the touch area and some advanced options in the desktop part of Windows 8.1, pretty much the same ones you find on a Windows 7/8 laptop. Overall, I’d say the battery is good and let’s move on to the acoustics. The player used here is Xbox Music and the device provides so-so volume, not very good bass and a vibrating back while listening to music. 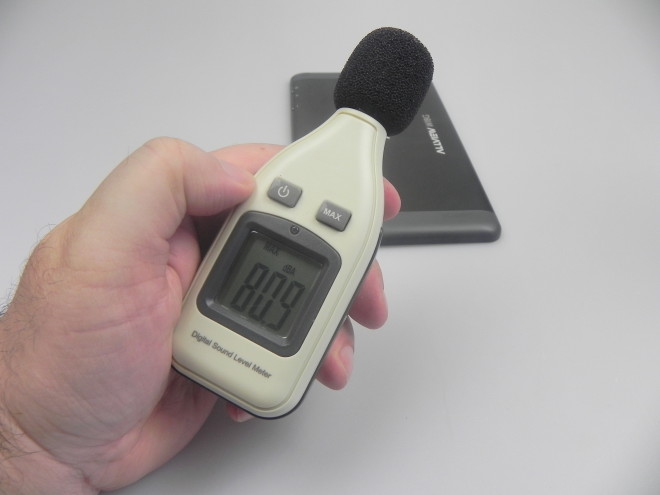 The sound is clear, notes are heard OK, but when the volume hits the maximum level, it tends to distort the sound a bit. Add to that the lack of equalizer. There’s a volume mixer in desktop mode, but that doesn’t cut it. We used a decibelmeter on this device, to find that we achieved 80.9 dBA at the back and a very low 62.8 dBA at the front, on account on some serious muffling on flat surfaces.

There’s only one speaker here, in spite of the appearances, that make it seem that there are two. Still, this unit isn’t very far from the appreciated Xiaomi Mi Pad and it’s 84 dBA. I’d say that for a tablet it’s good enough. Now, on to the screen! Allview Wi8G relies on an IPS LCD with an 8 inch diagonal and a 1280 x 800 pixel resolution and it uses the Xbox Video app to play content. 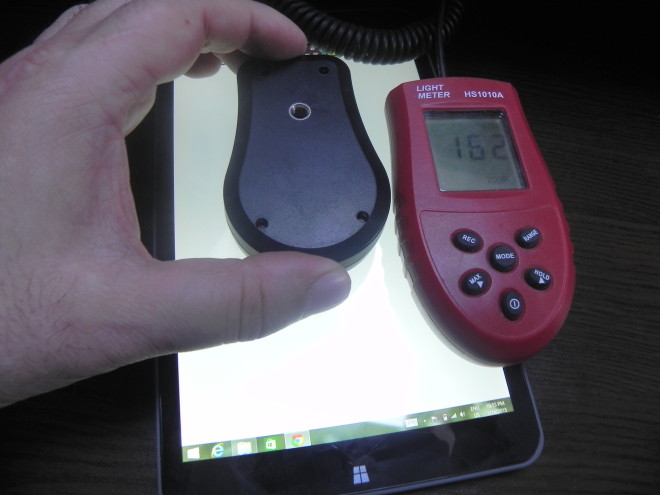 It offers OK colors, brightness that seems OK at first sight and view angles that are wide, but drop a lot when the brightness is set to a lower level. The pixels are of the RGB Stripe kind and the brightness we measured ourselves was 162 LUX, which is very low, maybe the lowest measured since we started using a luxmeter. The screen also suffers from high reflectivity.

As far as settings go, the screen offers the option to switch to a lower resolution in touch mode and there are also some text options, graphics properties and advanced options in the desktop mode, that I wouldn’t recommend you mess with. Speaking of desktop mode, its experience feels cramped, on account of the small screen and… my big fingers. A stylus would do wonders in this mode! 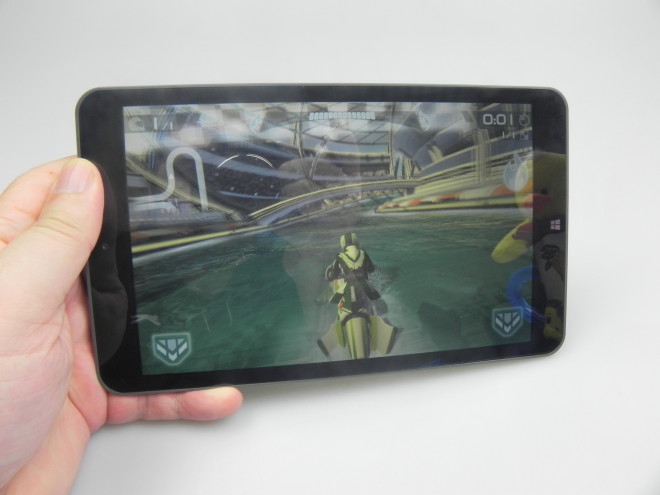 Overall, we can criticize the weak brightness, but at least the colors are OK and in real life I didn’t actually feel that low brightness and games didn’t suffer for example. The camera is present here just to check an option on the specs list and it produces blurry shots, but at least it has touch focus. I would find the front camera more useful, for Skype purposes.

Meanwhile, the camera UI comes with options like timer and exposure and that’s that. This model achieves a 35.1 degrees Celsius temperature after 15 minutes of playing the game Riptide GP2, so it doesn’t suffer from overheating. The device’s web browser is very fast and we’ve got a comfy keyboard in the mix, in case you don’t want to use a Bluetooth accessory. 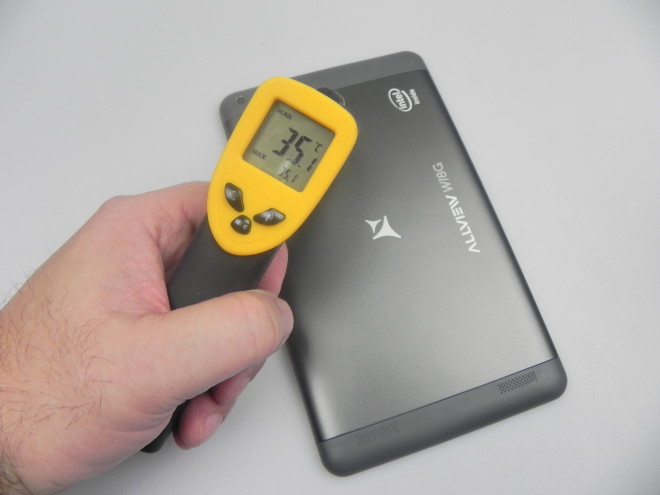 We also did a bit of benchmark testing, although the only relevant model we could compare this slate to was pretty much the ASUS VivoTab Note 8, that has similar specs, but more RAM. Here are the results:

This unit wins only 2 or 3 of the tests, but at least it doesn’t suffer from lag and runs the 3D game Riptide GP2 free of lag. Honestly, I find the game’s graphics to be a surprise, since it looks much better than many of the handsets I’ve played with lately for example. On the OS side, Allview provides Windows 8.1 with Office 365 Personal bundled for one year, with 1 TB of cloud storage.

The experience is the usual one in Windows 8.1: Start screen that brings you to the Metro area, evolved search in the Charms Bar, swipe gestures to close an app, show its options, alternate between apps and the option to Snap two apps next to each other in 50/50 screen view. Office is workable in the desktop area, but once again sausage fingers are a problem in Word or Excel and a stylus, mouse and keyboard can work wonders. 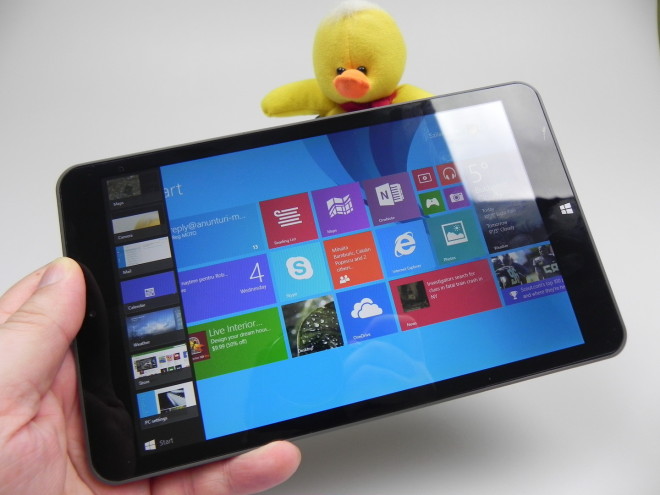 We get an USB OTG cable bundled with the tablet, allowing us to connect a USB drive, mouse, keyboard or even gamepad if we feel the need to. You can install X86 apps on this tablet in the desktop mode and speaking of which, we ran out of storage pretty fast, by simply installing benchmarks, Office and 2 games, which felt kind of odd for a 16 GB tablet. Finally, in the App List area, we find no bloatware whatsoever and only the basic apps, with a focus on the MSN ones. 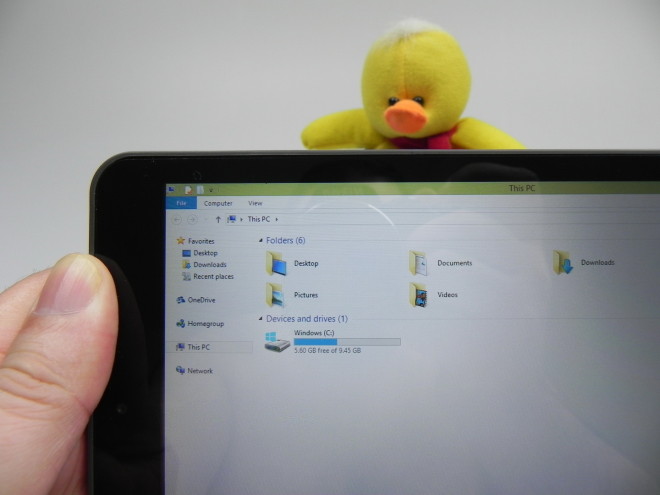 There’s the Calendar, Food and Drink, Health and Fitness, Maps, Money, News, OneDrive, OneNote, Reader, Reading List, Scan, Skype, Sport, Windows Store, Travel, Weather, Paint, NotePad and the works. There’s also a steps counter and the conclusion here is that $170 buys you a basic productivity package on the go, for students who don’t want to spend too much on an 8 inch Office device.

Now let’s grade the Allview Wi8G. We’re giving it an 8.5 out of 10 for design, an 8.9 for hardware and a 9 for OS, while always taking into account the price. This model’s final grade is 8.8 out of 10 and this one is perfect for the teenager who wants to experience Office on the go, but also wants to watch 7 hours of TV shows on the go. Too bad for the low brightness though… 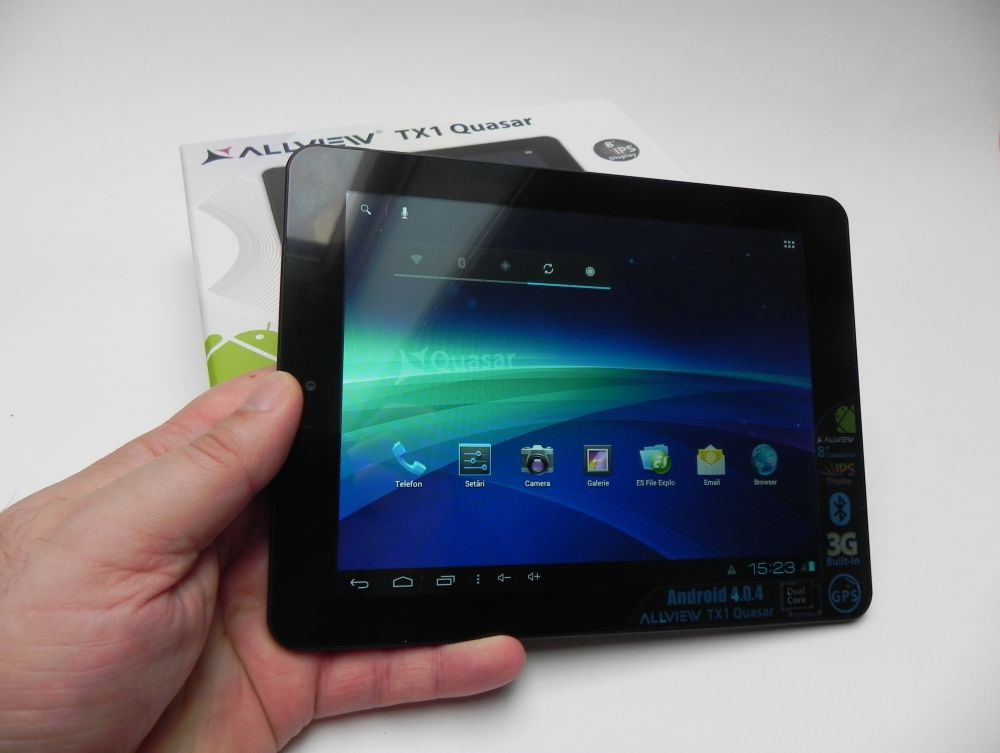