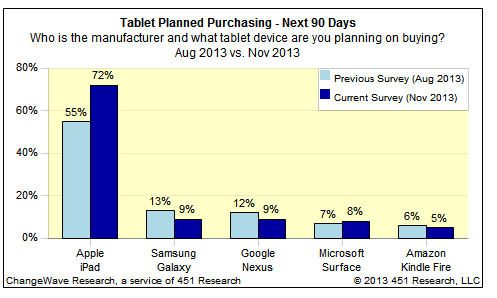 A recent ChangeWave survey has shown some interesting facts related to the tablet preferences in North America. The study involved 2,480 consumers from North America and their buying intentions for the holiday season.

Apparently, 13% of the surveyed folks will buy a tablet within the next 3 months and 72% plan to buy an Apple iPad. Back in August only 55% of the surveyed people intended to buy an iPad and now the number has increased, thanks to the launch of the iPad Air and iPad Mini Retina. This preference is not limited to North America, since in Japan 6 out of the top 10 tablets are iPads, when it comes to market share.

Apple now holds an advantage of 8 to 1 over the Samsung Galaxy models, Google Nexus and Microsoft Surface, plus a 14 to 1 advantage over the Amazon Kindle. More than half of the Apple buyers intend to purchase the iPad Air model, while the Retina Mini preference is around 16%. The iPad Air popularity is also confirmed by the number of devices that use the Software Developers Kit for Fiksu, a company tracking tablet usage from their launch date.