With Samsung rumored to be working on a new Exynos CPU and a new high resolution tablet panel, it only makes sense that a rumor about a new Galaxy Tab would appear. We’re dealing here with a rumors about the 2GHz dual core Exynos 5250 processor, that Samsung is working on and that will make to a supposed 11.6 inch slate with Android 4.0 Ice Cream Sandwich on board.

The device is supposed to be announced at MWC 2012 next month and it will surely make up for the rumored lack of the Galaxy S III. Rumors also say that we should expect here a model with a 2560 x 1600 pixel resolution, one that Android and Me claims to have handled behind the scenes at CES and wasn’t allowed to post pictures of it. A tablet with a dual core 2GHz processor of the Exynos kind and that huge display and huge resolution would be a big hit, but only if the device is kept slim and light enough.

This big screen is the main problem of the product, since it will make it less portable than the iPad and the 8.9 inch and 7 inch slates for example. We might also see an S Pen accessory for this unit or compatibility with the one already available on the Galaxy Note. Of course, this is all a bunch of rumors, so take all the info with the usual grain of salt. As far as the Exynos 5250 chip is concerned, this one is built around Cortex A15 cores instead of the A9 ones, so that gives it 40% more power. Samsung claims it’s already supplying partners with such chipsets, so the first devices based on them are ready for testing right now.

I have a feeling that the actual performance (and maybe power use) of these chips will be better than the Tegra 3. Do you agree? 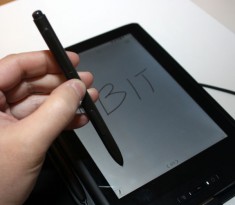